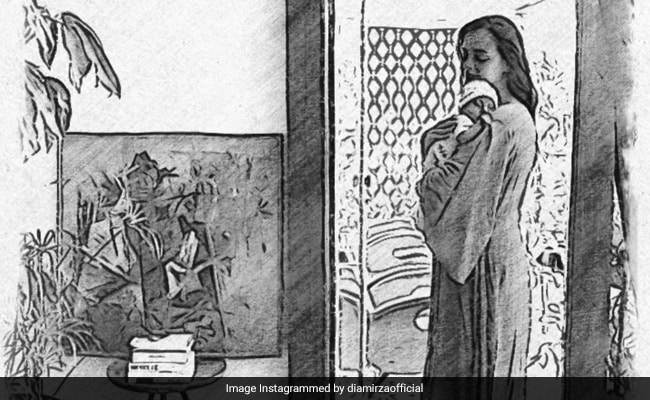 Dia Mirza posted a gem of a picture with her son Avyaan Azaad. In the dreamy picture, which is a sketch of sorts, Dia Mirza can be seen holding her little one in her arms. She captioned the post: "Our story has only just begun Avyaan. 15.09.2021." She added a tiger and an evil eye emoji to her post. Dia Mirza's Instafam filled up the comments section of her post with lots of love. Diana Penty commented: "Avyaan, you champion." Designer Manish Malhotra, actresses Amrira Arora, Neha Dhupia and Rasika Duggal filled up the post with heart emojis. "This is so sweet. May God bless the little one," wrote a fan.

Actress Dia Mirza and her husband Vaibhav Rekhi welcomed a baby boy in May this year. However, they shared the news with the world a few months later. Dia Mirza shared an emotional post for her son, who they have named Avyaan Azaad. In her post, she revealed that their son was born premature and was taken care of at the hospital. "These words perfectly exemplify Vaibhav and my feelings right now. Our heartbeat, our son Avyaan Azaad Rekhi was born on May 14th. Having arrived early, our little miracle has since then been cared for by tireless nurses and doctors in the Neonatal ICU," she wrote.

"Where Is Our Gasoline?": Cyberattack Causes Widespread Disruption In Iran