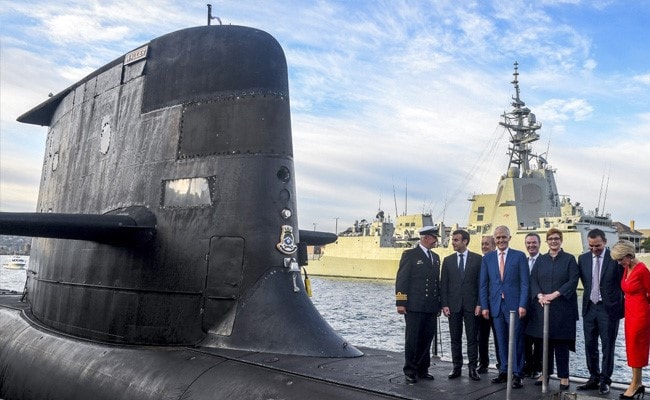 France expressed fury Thursday over Australia's surprise decision to scrap a huge submarines deal in favour of nuclear-powered subs from the US, slamming the move as a breach of trust.

"It's really a stab in the back. We had established a relationship of trust with Australia, this trust has been betrayed," Foreign Minister Jean-Yves Le Drian told France Info radio.

"I'm very angry today, and bitter... this is not something allies do to each other," he said.

"This unilateral, sudden and unforeseeable decision very much recalls what Mr Trump would do," Le Drian added, referring to the previous US president Donald Trump who exasperated Europe with unpredictable decision-making.

France's Naval Group, partly owned by the state, had been chosen to build 12 conventionally powered submarines to Australia, based on France's Barracuda nuclear-powered subs in development.

But US President Joe Biden and the prime ministers of Australia and Britain announced Wednesday a new defence pact that would see Canberra get a nuclear-powered submarine fleet, a privilege reserved for few American allies.

The move underscores increasing concerns about China's growing influence in the Indo-Pacific region, where France is also looking to protect its interests that include the overseas territories of New Caledonia and French Polynesia.

Asked if Paris had been "duped" by Washington over what Le Drian once called a "contract of the century" for France's naval yards, the minister replied: "Your analysis of the situation is more or less correct."

He said France and its allies had been working on a "coherent and structured Indo-Pacific policy" in the face of Beijing's growing regional might.

"We had been discussing that with the United States just recently, and here comes this break," Le Drian said, calling it "a huge breach of trust".

"We'll need clarifications. We have contracts -- the Australians need to tell us how they intend to get out of them," he added.

Defence Minister Florence Parly called Australia's about-face "very bad news with regards to keeping one's word", while adding that France is "clear-eyed as to how the United States treats its allies".

"In terms of geopolitics and international relations, it's serious," she told RFI radio on Thursday.

Parly and Le Drian had already denounced a "regrettable" move by Canberra in a statement overnight, saying it underscored the need to bolster "a European strategic autonomy".

"There is no other credible way to defend our interests and our values in the world, including in the Indo-Pacific," they said.

President Emmanuel Macron -- who is due to meet German Chancellor Angela Merkel for already scheduled talks later Thursday -- has repeatedly said that Europe needs to develop its own strategic and defence capabilities to be less reliant on the US.

Parly and Le Drian said that France retains its ambitions in the Indo-Pacific region as the "only European nation" with a presence there, due to its overseas territories with nearly two million French citizens and over 7,000 troops.

"France is a reliable partner and will continue to stick to its engagements, as it has always done," they said.

Australia Approves Covid Vaccine Booster Shots For 18 And Above

Want to experience Squid Game in real life? Here’s where you can go!

You Should Be Watching Bagman

How to be greener

Trump Reportedly Ignored Early COVID-19 Advice That Could Have Saved Over 130,000 Lives