Former India football team defender Arun Ghosh has revealed that the Pakistan hockey team had cheered for India to win the gold medal at the 1962 Asian Games in Jakarta.

"I still feel goosebumps when I go back to that evening of 4th September 1962. The Senayan Main Stadium in Jakarta was jam-packed with a partisan 1,00,000-strong Indonesian crowd cheering for Korea Republic at the top of their voice," Ghosh told All India Football Federation (AIFF) on the 58th anniversary of winning the gold medal.

"But we had our support too. Any guesses? Strange as it may sound, the Pakistan hockey team cheered for us. Unbelievable, but true.

"The hostile atmosphere made us more determined as the match moved ahead. Pradip-da (Pradip Kumar Banerjee) gave us the lead before Jarnail (Singh) doubled it three minutes later. Jarnail had stitches on his forehead and was, hence, played as a centre forward (striker) in the match."

Relive the ' incredible journey to win the Gold Medal at the Asian Games Jakarta 1962 ⚽ ️ pic.twitter.com/38DZRiu9tn

"There was pin-drop silence at the stadium when we went 2-0 up. Though Korea Republic scored a late goal, goalkeeper Peter (Thangaraj) saw off the danger till the end. The animosity against the Indian continent was so high that no one came to congratulate us even after the match. But, what a night it was for Indian football!"

"In the second match of the group stage, we faced a massive setback as Jarnail Singh had to be stretchered off. Following a collision, he started bleeding profusely and received ten stitches.

"The substitution rule was yet to be introduced in football then, and hence, we had to play one-man down for most of the match. The terrific trio of Chuni-PK-Balaram was on target and we edged past Thailand by a whopping 4-1 margin," Ghosh said.

"Rahim-saab (Syed Rahim, coach) knew his players like the back of his hand. He knew how to bring the best out of a certain player. After Jarnail got injured, he switched me from right-back to centre-back (central defender) and I lived up to his expectations. 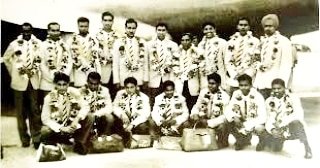 "Since then, I have always played as a centre-back for the Blue Tigers till I hung my boots.

"His other masterstroke was to bring a heavily bandaged Jarnail Singh back against South Vietnam in the semi-final. But not as a defender, rather as a centre-forward. Everyone got stunned but Jarnail scored in back-to-back games," he added.