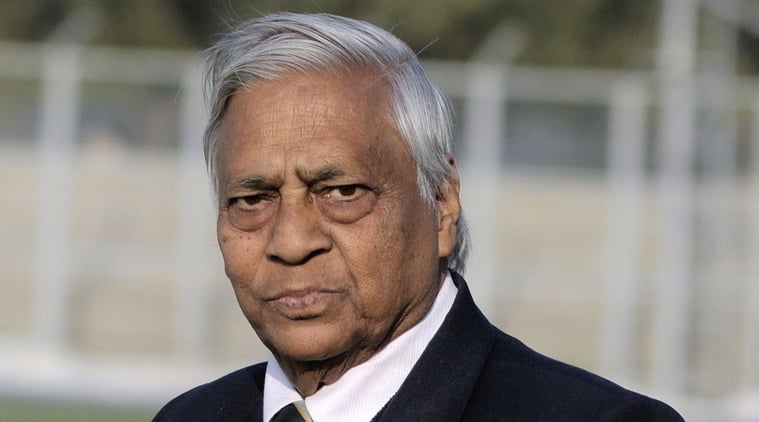 Rajinder Goel is survived by his wife and son Nitin Goel. (Source: Twitter/@AnirudhChaudhry)

Of all my contemporaries plying their trade of spinning a web on the cricket pitch, I was fondest of Rajinder Goel. He left us on June 21 without a murmur, which was so much in keeping with his cricketing years. No cribbing or remorse. Just a move to another pavilion to see what the Almighty has in store for him.

I’ve never been able to figure out the media assessment that it was Bishan Bedi who prevented Goel from donning the India cap. He was my senior by a country mile and lasted much longer on the Indian scene. But yes, I concede I was a trifle luckier than my erstwhile colleague from Rohtak. Beyond that, I ruefully accept that Goel was hugely unfortunate to miss the bus.

However, the courage with which he accepted the verdict and carried on serving cricket most selflessly is exemplary. Much of the time, while in Delhi, we were colleagues at the State Bank of India (SBI). We had a healthy, mutual respect for each other. The one thing I noticed about Goel was that he would always disappear from Delhi as soon as our games would get over. Such was his strong bond with his folks back in Rohtak.

Editorial | Rajinder Goel did not get to play for the country. That’s a mighty loss for Indian cricket.

Goel was almost robotic in his bowling pattern, and was a captain’s delight. He never asked for any particular end or field placement. “Just give me one over to find my rhythm,” he’d say confidently. And then he would go about his job with mechanical precision. The only people who had to be on their toes were the batsmen facing him.

I remember his very brief stint with the Lancashire league. During my county days with Northamptonshire, the West Indian great Rohan Kanhai once asked if there was a first-class left-arm spinner in India willing to try his hand for his old club Blackpool.

I got in touch with Goel and, within days, he was in Blackpool wrecking oppositions as was his wont. Everyone in the League was very pleased with Goel’s performance — except Goel himself. In less than a month, he was back in Rohtak. The Blackpool club secretary wrote to me about how he missed Goel. He also sent a few paper clippings about Goel’s outstanding bowling feats.

But Goel had to go home. “I’ve got a telegram, my wife is pregnant” — he had told the club. The club didn’t know how to handle the situation. So Goel, in a matter of a few days, went from Rohtak to Delhi to Heathrow to Manchester to Blackpool to Manchester to Heathrow to Delhi, and finally, back to Rohtak. All this without even seeing London. His urge to be with his family was very strong. League cricket was not for him. He just couldn’t take the English social life. Since I had known him for so long, I could understand. But how was I going to convince Kanhai?

In the 1980s, we had set up a Veteran Cricketers’ Benevolent Fund on the same lines as the famous Cricketers Benefit Fund Series (CBFS) in Sharjah. We would play the veterans’ series with Pakistan in India, Pakistan and Sharjah. Goel was the first beneficiary. I remember he was ever so thrilled and touched. He sobbed like a child hugging me tight. I can never forget that moment of gracious gratitude.

Goel was a self-professed “bania” and as such, was loathe to be a spendthrift. This trait reflected abundantly in his very stingy bowling figures too. Somewhere along the line, I reckon the “ambition” aspect, for him, might have taken the back seat. But he was a contended man, something I observed closely, and with a fair amount of envy, if I may add. Goel was a committed family man. And, of course, he was inseparable from his wife, Sushila. All that seems like a fairytale now. Rest in Peace, Goely. Cricket in the north can never be grateful enough for your awesome contribution.

This article first appeared in the print edition on June 23, 2020 under the title “Spinning A Magical Web”. The writer is a former captain of the Indian cricket team

"Are All Men Like This?" Asks Mira Rajput. She Shared ROFL Pic

To Vaccinate Entire Delhi In 3 Months, Arvind Kejriwal Does The Math