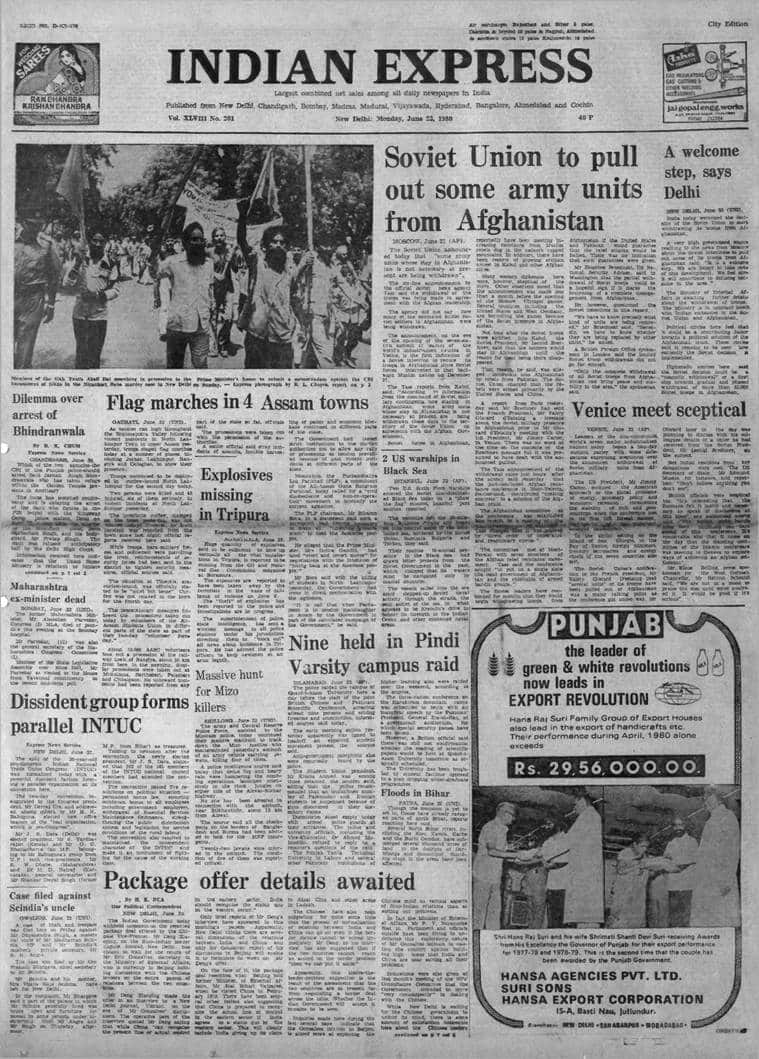 This is the front page of The Indian Express published on June 23, 1980.

The Indian government withheld comment on the reported package deal offered by the Chinese vice-premier, Deng Xiaoping, on the Sino-Indian border dispute. Instead, New Delhi has chosen to wait for the return of Eric Gonsalves, secretary in the ministry of external affairs, who is currently in Beijing holding discussions with the Chinese leaders on the entire gamut of relations between the two countries. Xiaoping made the offer in an interview to a New Delhi journal, Vikrant, on the eve of Gonsalves’ discussions. The operative part of the interview quoted Xiaoping saying that while China “can recognise the present Line of Actual Control at the eastern sector, India should recognise the status quo in the western sector.”

The Soviet Union announced today that “some army units whose stay in Afghanistan is not necessary at present are being withdrawn”. The six-line announcement by the official Soviet news agency said the withdrawal of the troops was being made in agreement with the Afghan leadership. The agency did not say how many of the estimated 85,000 Soviet soldiers in Afghanistan were being withdrawn.

As tension ran high throughout the Brahmaputra Valley following violent incidents in North Lakhimpur town in upper Assam yesterday, troops staged flag marches at a number of places including Jorhat, Lakhimpur, Rangiya and Golaghat, to show their presence. Troops continued to be deployed in curfew-bound North Lakhimpur for the second day. The indefinite curfew, clamped on the town yesterday, was not relaxed today. The situation at Tinsukhia, also curfew-bound, was officially stated to be “quiet but tense”. Curfew was not relaxed in the town for the fourth day.