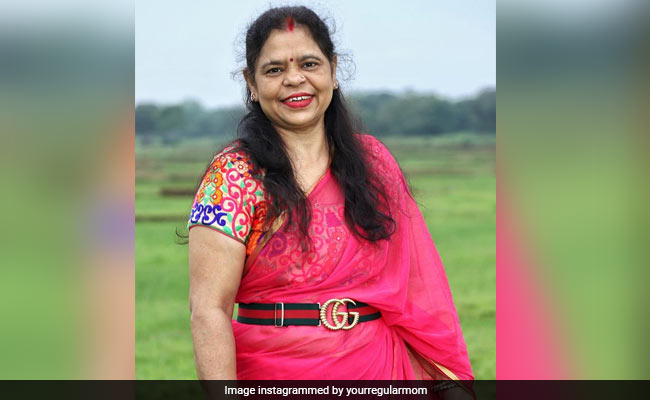 Anita Gupta styled the Gucci belt with a saree

Remember the desi mom who had the Internet in splits after she compared a Rs 35,000 Gucci belt to a school belt? Well, she is back, flaunting the belt in style.

In the new Instagram post, Anita Gupta is seen wearing a pink saree that is cinched at the waist with the belt. Sharing the photo, her daughter Chabi Gupta wrote on Instagram, " One way to style your Gucci belt with Indian saree ft. Desi mom."

For the uninitiated, the mother-daughter pair went viral on social media after Chabi Gupta posted a video of her mother reacting to the astoundingly high price of the belt. Chastising her daughter for splurging on a belt, Anita Gupta said she could not understand what was so special about it. She went a step further and said that it resembled a green-red school uniform belt, giving it the now popular monicker, the "DPS belt". Anita Gupta even went on to say that the belt could be bought for Rs 150 on a day when the buyer is not in the mood to bargain.

The entire incident was caught on camera and shared by her daughter on Instagram.

Posted on June 13, the video of the Ranchi-based woman and her daughter has till now racked up over four million views on Instagram. In case you missed it, you can watch the video here.

Reacting to the post, many users complimented Anita Gupta and called her a sport. One user said, "Aunty itni awesome kyu hai yaar ( Why is aunty so awesome?)"

Several others were also quick to mention that they could not "unsee" the fact that it did look like a school belt. One user said, "She is so pretty but it still looks like a DPS belt." Tagging the luxury brand, another user said, "Hire this model ASAP."

Tell us what you think of this adorable post in the comments section.