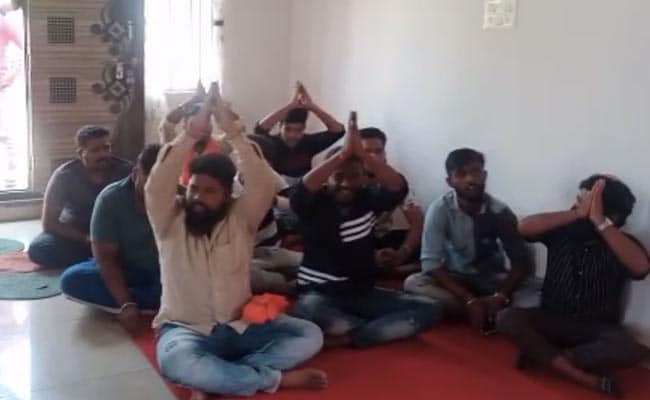 Activists of right-wing organisations sang Bhajans at the makeshift church in Hubbali.

Activists of the Bajrang Dal and Vishwa Hindu Parishad forced their way into a makeshift church in Karnataka's Hubbali on Sunday morning and sang bhajans or Hindu prayer songs as a protest, alleging forced religious conversions there.

A video of the incident showed dozens of women and men sitting inside the Bairidevarkoppa Church in Hubbali around 11 am singing bhajans with folded hands over their heads.

Both sides - members of the church and the activists of the right-wing organisations - alleged that they were attacked over the incident. Pastor Somu and some of his associates were admitted to hospital with minor injuries.

The pastor and others have been named in a complaint under the law for protection of Scheduled Castes and Tribes as well as one against "deliberate and malicious acts intended to outrage religious feelings". He has been arrested and three others were let off after questioning.

The church authorities said they filed a complaint in the matter on Monday as well. Labu Ram, the Commissioner of Police for Hubli-Dhadwad, confirmed the incident and said, "The investigation is going on. Only Somu Avaradhi has been arrested. So far, we have not received any complaint from the church."

Raghu Sakleshpora, the State Convenor of the Bjrang Dal, said, "A man called Vishvanath was taken there for conversion. He went to the police station from the church and filed a complaint against the Pastor Somu and others. Later, our members assembled inside the church and in order to protest, started singing Hindu bhajans."

"We haven't done anything wrong in this," said Shashi, a senior Bajran Dal activist.

Vishvanath, who filed the case against the pastor and others, alleging forced conversions also accused of pastor of abusing him in the makeshift church when he chanted Hindu prayers instead of the church prayer.

The church authorities, however, denied any conversion attempt by them.

"When they (the right-wing activists) started chanting bhajan in our church, the pastor Somu Avaradhi came. He was gheroed by them. A few ladies were also there who sustained injury during the heated situation and the pushing pulling," said reverend Cedric Jacob, a senior member of the church.