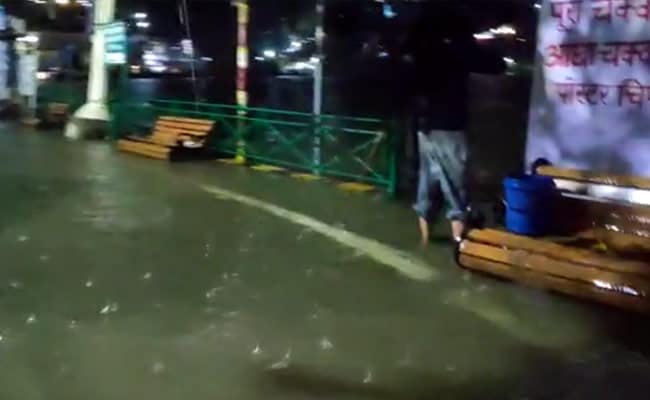 The iconic Mall Road has been flooded by the overflowing water

Water from the Naini Lake in Uttarakhand's Nainital overflowed its banks this evening, flooding the iconic Mall Road that runs parallel to the lake as rain continues to batter the mountain state for over 24 hours straight.

People are seen wading through ankle-deep water with vehicles making a splash as they drove by.

All national highways running from Nainital, Ranikhet, Almora to Haldwani and Kathgodam have been blocked as incessant rains pummelled Uttarakhand for the second consecutive day today. Passenger vehicles are not being allowed to cross the Chandrabhaga bridge, Tapovan, Lakshman Jhoola and Muni-ki-Reti Bhadrakali barriers in Rishikesh.

Authorities have advised Char Dham pilgrims to delay their journey until the weather improves. The movement of vehicles to the Himalayan temples have also been suspended. Regular prayers at the four Himalayan temples are continuing and pilgrims staying there are safe, a Devasthanam Board official told news agency PTI.

Three labourers from Nepal, staying in a tent near Lansdowne in the state's Pauri district, were killed as rains triggered a landslide that buried them alive. Two others have been hospitalised with injuries.

Chief Minister Pushkar Singh Dhami took stock of the conditions of roads and highways from the state disaster control room at the Secretariat.

The Mandakini River is flowing at its normal level despite heavy downpour in Kedarnath since Sunday night.

Schools, colleges and other educational institutions across Uttarakhand remained shut Monday, while a ban has been imposed on trekking, mountaineering and camping activities in the high altitude areas of the state, including the Nanda Devi biosphere reserve and various forest divisions, till Tuesday as a precautionary measure, reported news agency PTI.

The district-level Khel Mahakumbh events scheduled to be held at parade and pavilion grounds in Dehradun on October 18-19 will now be held on October 24-25.