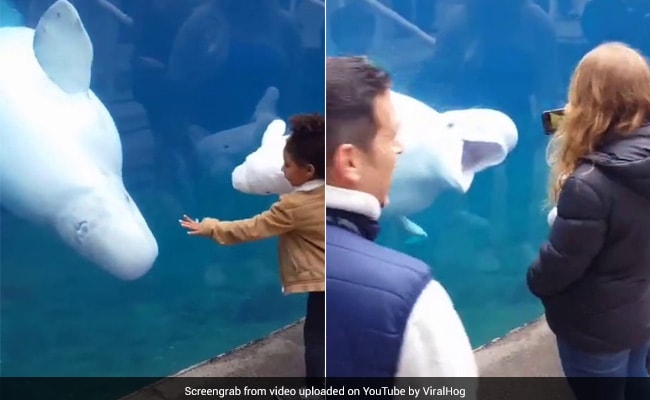 Juno the Beluga whale meets its miniature version in this adorable clip.

A video has emerged online that shows a beluga whale getting excited about seeing a toy whale outside an aquarium. The video shows a woman and her little daughter watching the beluga whale, also called white whale, inside the Mystic Aquarium in the US state of Connecticut. And as the girl, carrying a stuffed whale in her hand, moves on seeing the white whale, the aquatic mammal approaches her. After getting really close to the girl, the whale notices a similar creature across the glass enclosure. It then opens its mouth to show its excitement.

The little girl initially tries to touch the face of the whale but immediately steps back as the large creature opens its mouth.

The video description quotes the woman saying that she, her daughter Starlett, and their friends were at the aquarium to see the Beluga whales during the spring break. While going to the aquarium, they bought a Beluga stuffed whale from a gift shop, thinking the real one might “do something” after seeing the stuffed one.

Once they reached the aquarium, she asked her friend to record as they interacted with the Beluga whales. “Juno (the most interactive whale) saw the stuffed animal and looked like he was excited to see a long-lost friend,” she said.

Posted by ViralHog on YouTube, the video has got more than 5,000 views in around 24 hours. Many people have also commented on the cute video.

“Beluga: Keep that little beluga inside the water kid... Otherwise, it will die,” said a person with the username M K.

In another video featuring a beluga whale a couple of years ago, a man was seen playing fetch with the mammal. The video begins with the whale giving the ball to a man on the boat. The man then tosses the ball back in the water, and the friendly beluga whale is seen chasing it and returning it to him again. Read more about it here.

According to a National Geographic report, beluga whales' unusual colour makes them one of the most familiar and easily distinguishable of all whales.

When it comes to social behaviour, these whales generally live together in small groups known as pods. They are very vocal communicators and employ a diversified language of clicks, whistles, and clangs. These whales can also mimic other sounds, states the report.

What do you think of these videos? Tell us in the comments section below.