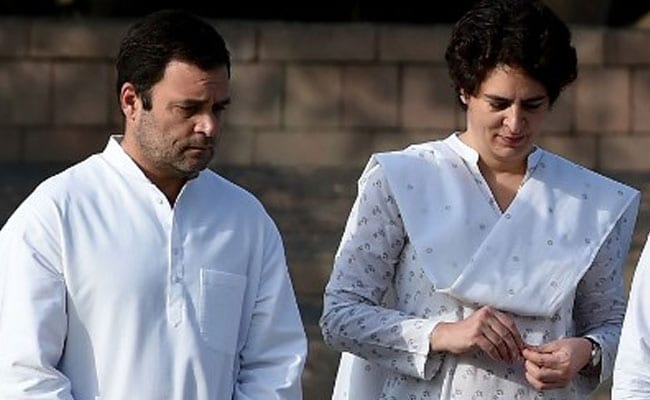 Rahul Gandhi and Priyanka Gandhi hit out at the UP government over rising crimes against women. (File)

Congress leader Rahul Gandhi today hit out at the Uttar Pradesh government over media reports of rising incidents of crime against women in the state. Instead of protecting women, the state government was trying to "save criminals", the Congress MP said, tagging a report which claimed that a BJP MLA allegedly took away a man accused of harassing a woman from police custody.

"How it started "Beti Bachao" (save daughter), how it's going "Apradhi Bachao" (save criminals)," the Congress leader tweeted sharing the report on the social media platform.

According to the media report, the BJP MLA forcefully entered a police station along with his party workers and took away an accused in a molestation case.

The report was also shared by Mr Gandhi's sister, Priyanka Gandhi Vadra, who questioned the state government for the allegedly deteorating law and order situation in the state.

"Will the UP CM tell that this is happening under which "mission"? "Beti bachao" (Save daughters) or "Apradhi bachao" (save criminals)?" Ms Vadra "tweeted.

The Congress has stepped up its attack on the UP government particularly after the Hathras incident in which a 19-year-old Dalit woman from the district was allegedly raped and attacked by four men. She later died due to her injuries at a hospital in Delhi.

The police handling in the case -- particularly the ;ate night cremation of the victim allegedly without the family's approval - led to angry protests across the country. The officials, however, said the cremation was done "as per the wishes of the family".

The probe in the case has been taken over by the CBI.