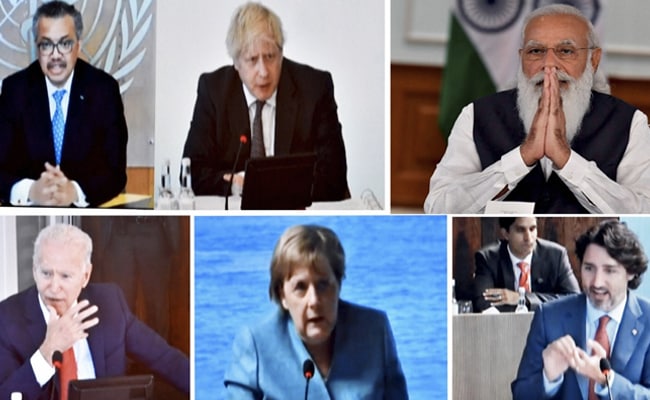 Prime Minister Narendra Modi today said India is a natural ally for the G7 countries in defending the shared values from a host of threats stemming from authoritarianism, terrorism and violent extremism, disinformation and economic coercion.

In a virtual address at a session on "open societies and open economies" at the G7 summit, the prime minister highlighted India's civilisational commitment to democracy, freedom of thought and liberty, according to the Ministry of External Affairs (MEA).

In his remarks, the prime minister underscored the vulnerabilities inherent in open societies and called on tech companies and social media platforms to ensure a safe cyber environment for their users, additional secretary (economic relations) in the MEA P Harish said at a press conference.

"The prime minister's views were appreciated by other leaders in the gathering," he said.

Mr Harish said the G7 leaders underlined their commitment to a free, open and a rules-based Indo-Pacific and resolved to collaborate with partners in the region.

India's participation at the G7 sessions reflected understanding within the bloc that resolution to "the biggest global crisis of our time" is not possible without India's involvement and support, he said, in a reference to the coronavirus pandemic.

He said India will remain deeply engaged with the G7 and guest partners on all major issues, including health governance, access to vaccines and climate action.

The senior MEA official also said that there was widespread support at the G7 deliberations for text-based negotiations on a proposal by India and South Africa for patent waiver on Covid vaccines.

As chair of G7, the UK invited India, Australia, South Korea, South Africa to the summit as guest countries.

The leaders of the world's advanced economies held a summit in Cornwall in the UK from June 11-13. It is for the first time the leaders of the grouping met in person since the coronavirus pandemic began.