Chirag Paswan Removed As Party Chief By Rebels. He Makes It LJP vs LJP 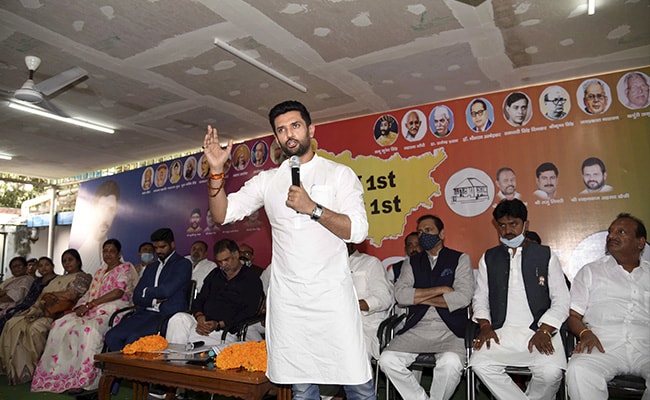 Chirag Paswan has been removed on the principle of "One Man, One Post". (File)

Chirag Paswan, isolated by a coup in his Lok Janshakti Party (LJP) led by his uncle, was removed as party president today in an "emergency meeting" of rebel MPs who are now calling the shots. But soon after the announcement, he retaliated by "expelling" uncle Pashupati Kumar Paras and four other MPs who have revolted against him for "anti-party activities".

Chirag Paswan was removed on the principle of "One Man, One Post", said the rebels. He was removed as leader of the LJP parliamentary party last evening. According to sources, the rebels intend to strip him of every position of power he held after taking over from his father and LJP founder Ram Vilas Paswan.

Suraj Bhan will function as working president until a new president is elected in a national executive meeting expected soon.

By the end of this week, Pashupati Kumar Paras's takeover of his brother's party will be complete, say sources. But Chirag Paswan's stance indicated he may yet making it an LJP versus LJP fight.

But it will be tough for him, given that five of the six LJP Lok Sabha MPs have revolted and he is the sixth.

Mr Paras, the younger brother of Ram Vilas Paswan and the lead player in the coup launched with help from Bihar Chief Minister Nitish Kumar and the BJP, snubbed his nephew's attempts at reconciliation.

Yesterday, he refused to meet Chirag Paswan, who waited at his doorstep for an hour and 45 minutes.

Rapidly losing his grip on the LJP, Paswan Junior posted an emotional tweet today and shared a letter he had written to his uncle in March.

"I tried very hard to keep the party formed by my father and my family united, but I failed. Party is like a mother and we must never betray or mother. People are above all else in a democracy. I thank those who had faith in the party," he wrote.

Seeds of revolt were sown last year when Chirag Paswan decided to break away from the BJP-led National Democratic Alliance (NDA) in the November Bihar election and focus his energies on defeating ally Nitish Kumar.

While the LJP won just one assembly seat out of Bihar's 243, its main contribution was to shave off at least 32 seats from the tally of Nitish Kumar's Janata Dal United (JDU). For Nitish Kumar, it meant a vastly diminished status in the NDA with the BJP emerging as the dominant partner.

After the polls, the Bihar Chief Minister made it clear that he did not want Chirag to have anything to do with the NDA - or the BJP for that matter.

Sources say senior JDU leader Lallan Singh and a BJP Rajya Sabha MP told Mr Paras that he could become a part of the NDA in Bihar and the Centre only if Chirag Paswan was not in command.

The decision to topple Mr Paswan was taken in a meeting in Patna on Saturday.

Sources say after Mr Paras is elected the LJP's national president, his chances of an entry into the Union Cabinet will brighten.