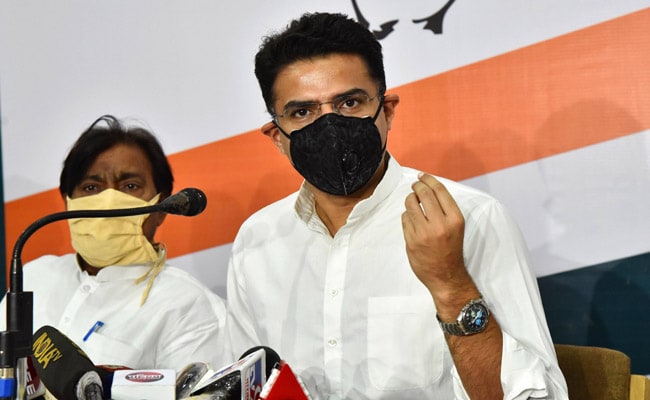 Sachin Pilot slammed the Centre on Wednesday over its asset monetisation programme.

Congress leader Sachin Pilot lashed out at the Centre on Wednesday over its asset monetisation programme, saying the central government should help the poor and the middle-class instead of giving away the assets created in the past 70 years to the private sector at throwaway prices.

"The government should help poor and middle-class people instead of handing over the assets of the country to select people," he told reporters in Rajasthan's Dausa.

He claimed that the Centre wants to give the assets, be it railways, airports or big institutions, to its acquaintances at throwaway prices.

Sachin Pilot said despite the rise in fuel prices and unemployment, Union ministers are taking out 'Jan Ashirwad Yatra'.

"The price of petrol is above Rs 105, a gas cylinder is for Rs 900, there are no jobs, lakhs of people have died due to coronavirus. There was an oxygen shortage during the second wave of the pandemic but still the ministers are seeking blessings," he said.

During his Dausa visit, the Congress leader exuded confidence that the Congress would win the Zila Parishad and Panchayat Samiti elections.

The elections will be held in Bharatpur, Dausa, Jaipur, Jodhpur, Sawai Madhopur and Sirohi districts.

Polling will be held in three phases on August 26, 29 and September 1, and counting of votes will take place on September 4 at the district headquarters.

Yet Another Bengaluru Building Tilts, Evacuated, Then Demolished