Caught On Camera, Horrific Assault Of Doctor By Family Of Covid Victim 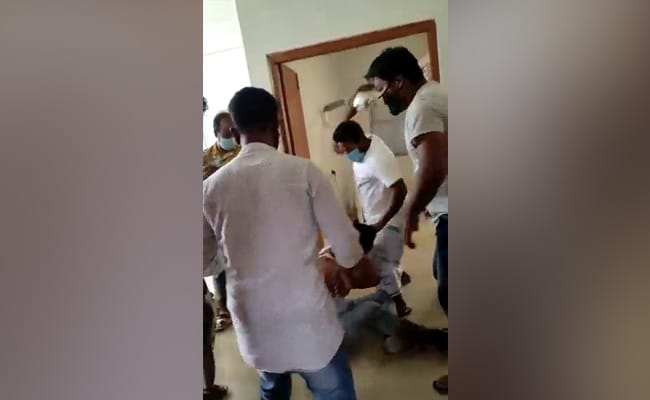 A video clip of the attack on the doctor has gone viral on social media.

A doctor at a coronavirus facility in Assam's Hojai, around 140 kilometres from Guwahati, was on Tuesday mercilessly punched, kicked, and pounded with metal trash cans and bricks, by the relatives of a Covid patient who had died, allegedly due to oxygen shortage. Locals also assaulted the doctor who is now hospitalised but stable.

A video clip of the horrific violence against the doctor has gone viral on social media after which 24 people, including the main accused, were arrested in overnight searches.

The incident took place on Tuesday afternoon at the city's Udali Model Hospital, where Dr Seuj Kumar Senapati was on duty.

The patient named Giyaz Uddin, a resident of Pipal Pukhuri village, had died on Tuesday due to Covid-linked complications.

"The attentant of the patient came to me saying the patient is serious and has not passed urine since morning. I went to the room and found that the patient was dead. As I broke the news to the attendant, another relative started abusing me," Dr Senapati told the media.

Angered with the patient's death, a mob attacked the hospital. Most medical officers managed to escape. Dr Senapati, however, locked himself in a room. The mob broke through and severely assaulted him.

"They ransacked the hospital, we (the staff) ran for safety. I entered a room and tried to hide but they found me and assaulted me. They snatched my gold chain, my ring and my mobile," he added saying there were around 30 people.

Dr Senapati, seriously injured, was immediately shifted to another hospital in Nagaon.

The assault has drawn widespread condemnation.

Dr JA Jayalal, president of the Indian Medical Association, has condemned the incident.

Members of the Assam chapter of Assam Medical Services Association (AMSA) have demanded strict action against the culprits. They have also boycotted the Outpatient department (OPD) services today in all government medical facilities.

Emergency services, Covid duties would however continue. Doctors will also wear black badges today as a mark of protest.

Chief Minister Himanta Biswa Sarma has directed the police to investigate the attack and arrest those responsible.

Such barbaric attacks on our frontline workers won't be tolerated by our administration. @gpsinghassam@assampolice Ensure that the culprits brought to justice. https://t.co/HwQfbWwYmn

GP Singh, Additional Director General of Police, Assam, said a case had been registered and one person allegedly involved in the attack has been arrested.