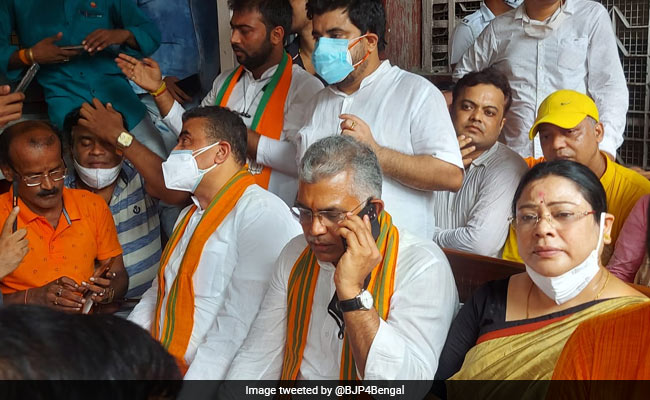 The BJP leaders' protest was in violation of Covid rules, police sources told

Bengal's top BJP leaders - including the party's state chief Dilip Ghosh and Leader of Opposition in the state Assembly Suvendu Adhikari - were among dozens of BJP workers arrested in Kolkata today for violating Covid rules during a protest in the heart of the city.

150 leaders and party workers were arrested today, the BJP has alleged.

The BJP leaders, including former Minister of State Debasree Chowdhury, staged a sit-in at the Gandhi statue to mark the "Poschimbongo Bachao Diwas (Save West Bengal Day)" to counter the Trinamool Congress's "Khela Hobe Diwas".

The BJP had announced they would organise a dharna at Rani Rashmoni Avenue - a street designated for protests in the city. However, even after they failed to get the necessary permissions, they showed up at the Gandhi statue. The police battled with central security provided to several BJP leaders to arrest them.

The Trinamool Congress (TMC) has hurt the sentiments by celebrating Khela Hobe Diwas today - a day recorded in Indian history as the Direction Action Day of 1946 when protests called by the Muslim League had led to horrific riots in Kolkata which came to be known as the Great Calcutta Killing, the BJP has claimed.

The Trinamool clarified that the Khela Hobe Diwas was being held to encourage sports in the state and in remembrance of a stampede during a football match in the city on this day in 1980. Throughout the day, football matches were held under the Khela Hobe banner in Kolkata and the districts by sports clubs supported by Trinamool leaders at the local level.

The arrested BJP workers and leaders were released after being taken to the police headquarters in Kolkata's Lalbazar.

"The partisan police has murdered democracy by arresting BJP leaders during the Save West Bengal Day'," the party said in a statement.

The BJP leaders' protest was in violation of Covid rules which prohibit political gatherings and meetings, police sources told.