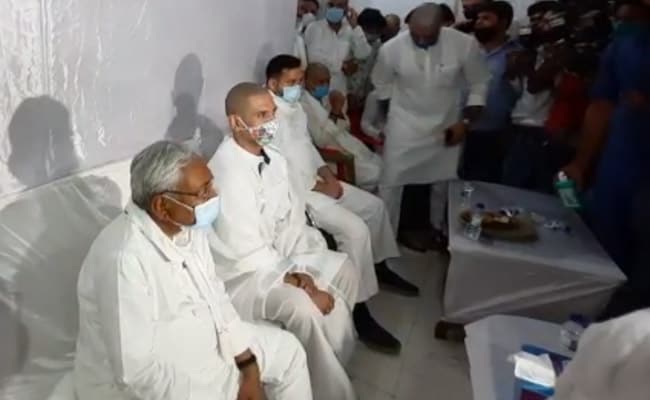 If Nitish Kumar is guilty, then he belongs in jail, Chirag Paswan said today (File)

Bihar Chief Minister Nitish Kumar, fighting on multiple fronts in the homestretch of the Bihar election, was served another example of his complicated relationship with his ally as a prominent BJP leader praised his rival Chirag Paswan.

Tejasvi Surya, the BJP MP from Karnataka who is in Bihar to campaign for the polls, effusively praised the Lok Janshakti Party leader today as an "energetic" leader and a "special friend".

"Chirag Paswan is a very energetic leader. In parliament, he raises issues of Bihar complete with statistics. He is a well-known youth leader, a special friend and I wish him the very best," said Mr Surya, 29.

He added that Mr Paswan, 37, had made his stand clear.

Asked by reporters whether this meant that there was some truth to Mr Paswan's frequent declarations of forming a government with the BJP (and minus Nitish Kumar) after the November 10 Bihar verdict, Mr Surya said: "That is something that is for after the elections".

This was followed by the usual assertions that Nitish Kumar was the NDA leader and would be Chief Minister after an NDA victory, but for those who want to read the signs, the damage was done.

"Our main leader is Nitish Kumar. He will be the Chief Minister of Bihar. The BJP and the NDA coalition will win a two-thirds majority and a Nitish Kumar government will be formed," said the Bengaluru South MP in Arrah.

Chirag Paswan, who is contesting the polls separately from the BJP-led National Democratic Alliance (NDA) only to fight Nitish Kumar, has rarely let a day go by without attacking the Chief Minister. His latest threat is to investigate Nitish Kumar for corruption and he said this morning: "If Nitish Kumar is guilty, then he belongs in jail."

While BJP leaders in Bihar like Sushil Kumar Modi and Bhupendra Yadav have denounced Chirag Paswan, saying he is no longer a part of the NDA in the state, the ruling party's central leadership has refused to cut him loose and has been ambiguous in a manner that has been hugely upsetting for Nitish Kumar.

This has kept alive speculation that the BJP is keeping Chirag Paswan has its Plan B to keep Nitish Kumar in check, especially as the Chief Minister is facing a lot of public anger in his campaign this time.