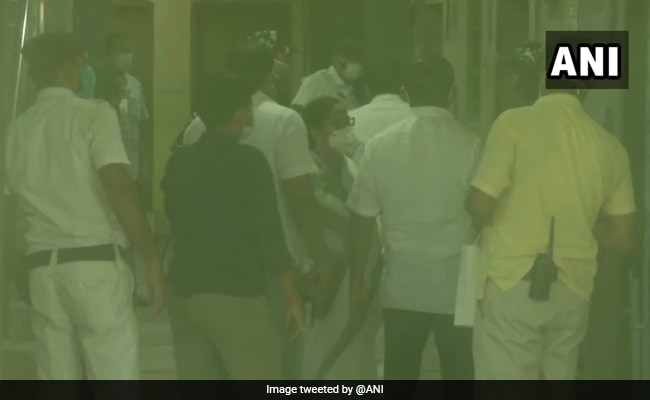 A furious Mamata Banerjee landed at the CBI office in Kolkata today as two of her ministers, Firhad Hakim and Subrata Mukherjee, were arrested in the Narada bribery case. "The way they have been arrested without due procedure, CBI will have to arrest me also," the Bengal Chief Minister said, according to Trinamool's lawyer Anidya Raut, She spent 45 minutes at the CBI office as Trinamool leaders protested outside.

Central forces arrived at the homes of the ministers and two other leaders this morning and took them away in a dramatic escalation of the Bengal-Centre clash brewing since Mamata Banerjee's election victory.

Firhad Hakim, taken away by central security personnel from his home just after 9 am, alleged that he was being arrested without proper sanction. Central forces also went to the homes of Trinamool MLA Madan Mitra and former Trinamool leader Sovan Chatterjee and took them to the CBI office. Sovan Chatterjee, Kolkata's former mayor and senior minister, quit the Trinamool in 2019, joined the BJP but quit that party too this March.

Governor Jagdeep Dhankhar had earlier this month sanctioned CBI investigations against the four.

The Speaker of the state assembly has to sanction the prosecution of MLAs. But in this case, the CBI did not ask the Bengal assembly Speaker for sanction but approached the Governor instead, in January. The Governor said he had the authority to grant sanction not because the four leaders were MLAs but because they were ministers sworn in by him in 2011.

All four were ministers in the previous Mamata Banerjee government when the Narada bribery tapes were shot in 2014. Firhad Hakim and Subrata Mukherjee were sworn in by the Governor as members of the new Mamata Banerjee cabinet after she won a third straight term.

The case involves a sting operation by the Narada news portal, in which Trinamool leaders were on camera accepting bribes.

A journalist from Delhi came to Kolkata, posed as a businessman planning to invest in Bengal, gave wads of cash to seven Trinamool MPs, four ministers, one MLA and a police officer as bribe and taped the entire operation.

The so-called "Narada tapes" were released just before the 2016 assembly elections in the state.

Mamata Banerjee's party has questioned the timing of the action against Trinamool ministers just days after her landslide victory in polls that turned into a fierce prestige fight between her and the BJP.

Of the 12 Trinamool leaders on the Narada tape, Mukul Roy, who was then a Trinamool Rajya Sabha MP and Suvendu Adhikari, who was a Lok Sabha MP, have since joined the BJP.

The prosecution of Suvendu Adhikari, now a BJP MLA from Nandigram, has not been sanctioned yet by Lok Sabha Speaker Om Birla.

Mukul Roy has just been elected BJP MLA. There has been no action against him either. In the sting tapes, he was not actually seen taking cash but he sent the sting operator to a police officer who was seen taking bribes.

"Khela Hobe" Across India: Mamata Banerjee's Warning For Next Elections

"You Tell Me": BS Yediyurappa Laughs Off Turmoil Talk After Meeting PM