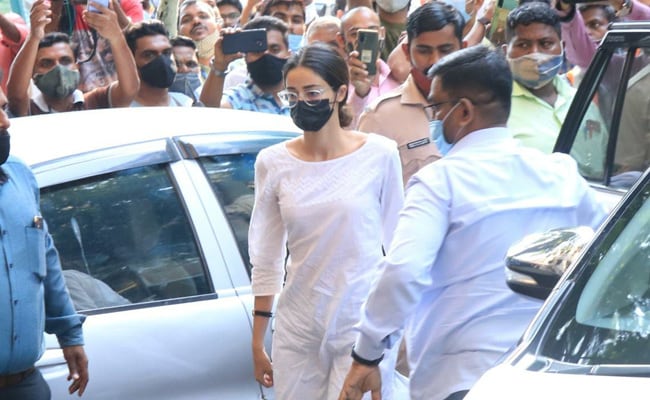 Actor Ananya Panday's Mumbai home was raided today by the Narcotics Control Bureau (NCB) and her laptop and mobile phone were seized, reportedly in connection with the drugs-on-cruise case in which Aryan Khan and others were arrested earlier this month.

Ananya Panday, summoned by the anti-drugs agency, went for her questioning to the NCB office with her father Chunky Panday, also an actor.

The 22-year-old debuted in films in 2019 and has since been counted in the big league, having starred in several high-profile movies.

Ananya Panday's name reportedly featured in the WhatsApp chats of one of the accused in the case involving drugs seized during a rave party on a cruise on October 2. Aryan Khan, his friend Arbaaz Merchant and five others were arrested after raids on the ship by NCB officers in disguise.

Ananya Panday and Aryan Khan, the 23-year-old son of Shah Rukh Khan, are part of a group of star children who have been known to socialise together. Ananya and Aryan's sister Suhana are best friends.

The NCB's raid signals that the anti-drugs agency is going for the A-list in its investigations on an alleged "Bollywood-drugs link". Over the past year, several high-profile actors have been questioned in connection with a drugs angle that emerged in the Sushant Singh Rajput death investigations.

Aryan Khan has been in jail since October 8 and was denied bail yesterday by a court that said his WhatsApp chat revealed his involvement in "illicit drug activities".

Though Aryan Khan's lawyers said nothing was found on him, the court said six grams of charas was hidden in his friend Arbaaz Merchant's shoe, and it seemed Aryan Khan knew about it, so "it can be said that it was in conscious possession of both the accused".

It also said the chats revealed a "nexus of the Accused no 1 (Aryan Khan) with suppliers and peddlers".