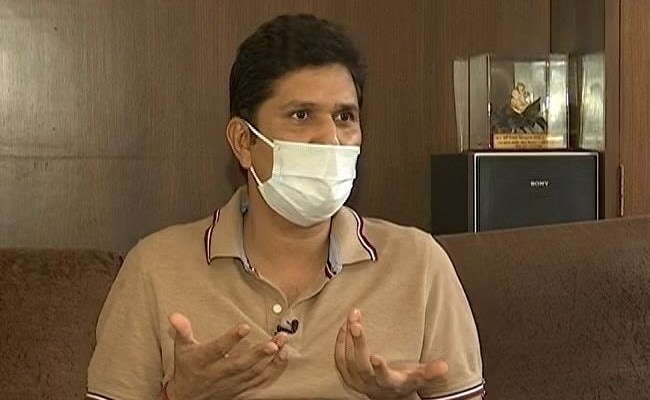 Saurabh Bharadwaj spoke to about recovering from Covid.

Aam Aadmi Party MLA Saurabh Bharadwaj, who last month released a video appeal from his hospital bed in Delhi for medical oxygen when he was being treated for Covid, today recalled the lessons he learnt during the recovery.

The 41-year-old AAP leader said that "young people have a false sense of confidence", which puts them at a greater risk of contracting the virus. Mr Bharadwaj had tested positive for Covid on April 12.

While he has got a Covid-negative report now, he says he feels "very weak". "My lungs are not functioning at full capacity. The problem is young people think they can't get affected... they have a false sense of confidence. They think Covid can't do them any harm," he told.

Recalling his own oversight, he shared: "When I contracted the virus, initially for a few days, I got very high fever... and I kept thinking my body is fighting well. I kept taking medicines after consulting my doctor. After a week, my health started deteriorating further and it began to worry my wife. Doctors told me to get a few tests done."

"That's when we realised that Covid had affected my lungs very badly. The same evening, my oxygen level started dipping. I was given medical oxygen. Within two days, I was gasping for breath. I was shifted to an ICU."

Severe illness leads to a feeling of helplessness, he suggested. "In half-conscious state, you realise that a fellow patient - whose voice you heard but never saw - has died," Mr Bharadwaj shared.

At a time when Delhi's oxygen crisis is being discussed in Supreme Court and is being widely reported, the AAP leader shared his views.

"Doctors do everything they can to save lives. But we keep coming across these reports of issues such as oxygen not reaching the hospitals, political tensions rising because of that.... This is a time when everyone should unite and fight together."

In the video that he had shared last month from the hospital bed, he had talked about valuing lives over everything else.

"The hospital in which I am admitted has only three hours of oxygen left. When I remove this mask, it feels like a non-swimmer has been pushed into a pool and is gasping for breath," the Greater Kailash MLA was heard saying in the video.

Urging the centre and the Haryana government to work together and not stop the supply of oxygen from reaching Delhi, he had further appealed: "A lot of people are dependent on oxygen and without oxygen, these people will die just like fish die in the absence of water. This is a time for all to come together to work."

Delhi is one of the worst-affected cities as India fights a second, deadlier Covid wave. Hospitals across the city have been buckling under the pressure of rising cases.

Speaking to this evening, he shared why he felt a need to post the message. "You realise how critical oxygen is when you are on oxygen support. I felt suffocated when my oxygen dipped. At the time when people are dying, political parties are fighting over so much, I felt we leaders are so petty. I am not blaming any party but realising this is important," he said.

Yet again warning the youth, he said: "Personally it was a shock for me. I was fit and had no co-morbidities. I go to gym everyday. I thought even if I get Covid, it would be manageable."