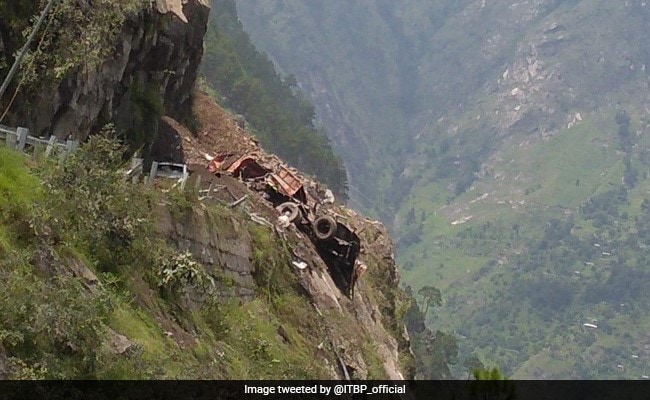 Kinnaur landslide: Teams of the Indo-Tibetan Border Police have been sent to the area

Eleven people have died and around 30 are missing after a landslide in Himachal Pradesh's Kinnaur this afternoon left several vehicles buried under debris.

A state-run bus, a truck and a few cars were trapped after the landslide blocked the Reckong Peo-Shimla highway. The bus, travelling to Shimla, reportedly had 40 people on board.

Some 25-30 people are trapped or buried, an official told Reuters. Ten people have been rescued and are in hospital.

A video showed boulders and rocks rolling down the hillside with a roar before crashing into vehicles on the highway.

Around 200 troops of the Indo-Tibetan Border Police (ITBP) were sent for rescue efforts.

"We expect the rescue operations to continue through the night, if not longer," Vivek Pandey, an ITBP spokesman, was quoted as saying by news agency Reuters.

"The area is currently very dangerous," he added.

"I've directed the police and the local administration to carry out rescue operations. We have received information that one bus and a car could have been hit. We are waiting for detailed information," Mr Thakur said.

Prime Minister Narendra Modi and Union Home Minister Amit Shah spoke to Mr Thakur and assured him of all possible help, according to the government.

PM @narendramodi spoke to Himachal Pradesh CM @jairamthakurbjp regarding the situation in the wake of the landslide in Kinnaur. PM assured all possible support in the ongoing rescue operations.

Heavy, incessant rain has caused many landslides in parts of Himachal Pradesh over the past few weeks.

Last month, nine tourists were killed after huge boulders fell on their cars in another part of Kinnaur.

A video that was circulated online showed boulders tumbling downhill and smashing into a bridge.

Many such videos have emerged from the state this season along with cloudburst and flashfloods. In another incident, a stretch of the road collapsed as a hillside crashed down in dramatic visuals of a landslide at Sirmaur after two days of incessant rain.

Exports At The Cusp Of Exponential Growth, Says Piyush Goyal