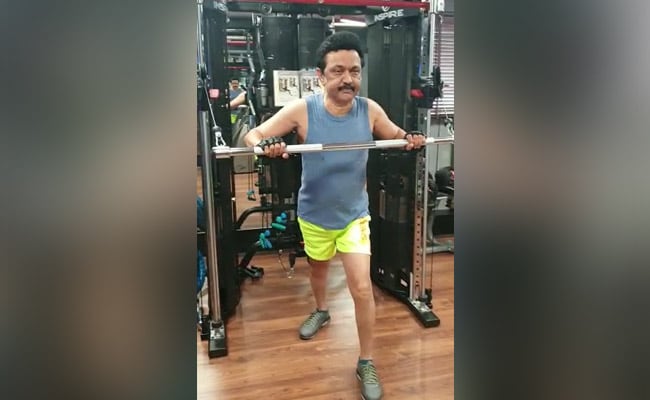 MK Stalin is seen working out in his latest video.

Tamil Nadu Chief Minister MK Stalin is setting fitness goals with a new video that shows him working out at a gym.

The video - which has been widely shared on social media - is his attempt at promoting fitness. In the 37-second clip, the Tamil Nadu Chief Minister is seen engrossed in his routine.

A few weeks ago, Stalin - who scored a thumping win in April-May elections - was seen cycling on the road to Mamallapuram and obliging locals with selfies.

Many locals were surprised as they spotted their Chief Minister pedalling along with others. The DMK leader also stopped at a roadside stall for a cup of tea.

Cyclers and walkers along Chennai's East Coast road were in for a surprise as they saw Tamil Nadu Chief Minister MK Stalin cycling. pic.twitter.com/0CKWvjMfCk

In February, while speaking to, Stalin had talked about yoga being a part of his daily routine.

"Although, I keep quite busy working, I enjoy time with my grand children and relax. I wake up early, go for a walk, do yoga. I cycle once in 10 days. These are my physical exercises. I don't feel tired even if I am very busy," he had said at that time, adding that he enjoys listening to Carnatic music.

While fuel prices have been rising across the country, the state government announced that prices will be cut in the state by Rs 3 in a big relief for locals. The DMK government, however, is yet to implement other promises including Rs 100 subsidy for LPG and Rs 1,000 allowance for housewives. The party has said it will fulfil all its promises.

MK Stalin has also been trying to take aggressive steps in the fight against coronavirus.

The state's daily tally, which crossed 36,000-mark at the peak of the second wave, has drastically tipped to around 1,800 now.

Vin Diesel Walked Paul Walker's Daughter Down The Aisle. It's OK To Cry

Neha Bhasin Wishes Husband On Anniversary With Throwbacks From Wedding