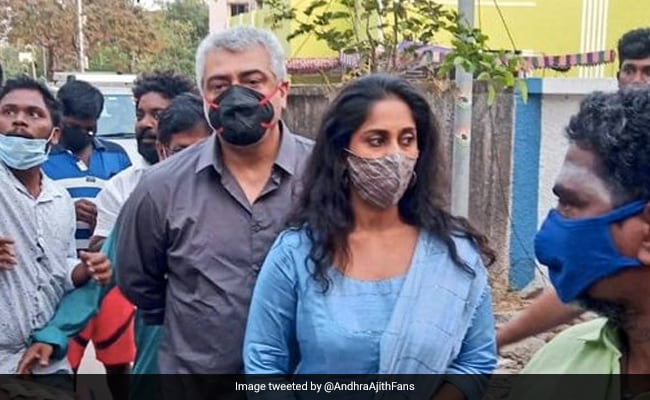 Tamil superstar Ajith is trending on Twitter after voting today - not because he voted but because of viral video of the actor taking away the phone from a mask-less fan who tried to get a selfie with him. Tamil Nadu votes for 234 seats in its Assembly today - Ajith, 49, and his wife Shalini arrived at a polling booth in the Chennai neighbourhood of Thiruvanmiyur this morning, reports The News Minute. In footage that has now going viral, a fan manages to get close enough to the actor to take a selfie with him - without Ajith's consent. Ajith is seen snatching the phone away from the unmasked fan. He is believed to have returned it after schooling the fan.

Ajith : Sorry Sorry
Fan : Ok Thala.
He clearly didn't throw the phone down after getting it.#Valimai#AjithKumarpic.twitter.com/naPEL5dIM5

On Twitter, opinion is divided. Ajith fans have praised him for not allowing someone not following COVID-19 protocol to take his picture. TV anchor Divya Dharshini tweeted in favour of the actor, asking that he be given space while voting.

The way Ajith sir was treated today was sad.... he gave us fans soooo much happiness , shudnt we giv him peace in return while he is exercising he basic right to vote with his family ... but Ajith sir ur way too patient #Ajith#TamilNaduElections2021

What #Ajith did, was 200% correct! He deserves no reprimand.
At a time when India is recording record number of cases, some idiots don't even seem to think twice before removing masks. Especially the 'youth' idiots. They think they can easily survive Covid, but what about elders?

Just now watched that video!!Without even wearing mask, coming near people is first of all very bad thing and we should know how to behave in some places! Its not a private meeting!????That's why #Thala#Ajith got angry.. snatched his phone... and later he gave it back..

Fans of actor Vijay, however, have grabbed the opportunity to run Ajith down - for those who don't know, the intense rivalry between Ajith's fans and those of Vijay is of long-standing and of epic proportions. Tweets from Vijay fans shredded Ajith for refusing a selfie with a fan.

#Ajith - Snatching a fan's handphone to avoid taking selfie and chased his fans out of the voting place..#Vijay - Took his selfie from his own phone with millions of fans who waited for him in Neyveli..The difference between Vijay and Ajith.. Ennam Pol Vazhkai ????

Vijay also voted today, thrilling the Internet by cycling to his polling booth.

#Vijay arrives in cycle to cast his vote #TamilNaduElectionspic.twitter.com/iKY4bkIqA8

Ajith, star of films such as Citizen and the 2007 remake of Rajinikanth's Billa, was last seen in 2019 film Nerkonda Paarvai. His next release is work-in-progress Valimai. Vijay, meantime, had a film out in January - Master - and is filming an untitled project.