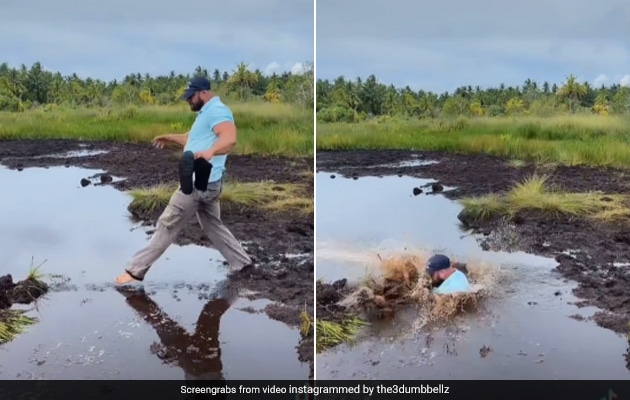 Martin Lewis plunged straight into muddy water while trying to cross a swamp.

A video of a man's spectacularly unsuccessful attempt at crossing a swamp has gone viral on social media. Martin Lewis, a British tourist in the Maldives, was trying not to get his shoes and trousers dirty when he ended up submerged completely in murky brown water, a hilarious clip recorded by his wife shows. According to Daily Mail, Mr Lewis and his wife Rachael were holidaying on the island of Fuvahmulah when they decided to "take a shortcut" across a swamp on Thursday

It was decision Martin has come to regret.

Footage that has gone massively viral on social media with millions of views shows Mr Lewis carefully taking his shoes off before attempting the crossing. "I don't know how I'm going to get across, see my trousers are getting dirty," he was heard saying as he stood in front of the muddy water. Then, he took a step forward into the water, and promptly plunged straight inside as his wife laughed hysterically.

Mr Lewis shared the video on TikTok last week, where it quickly went viral with almost 28 million views and had people in splits. It was soon shared on Instagram by several meme pages - racking up over 6 million views.

Mr Lewis himself shared the clip on Instagram yesterday.

"We are currently in the Maldives and my wife suggested taking a shortcut across the island to get to the other side," Martin Lewis told Daily Mail.

"I'll be honest, I knew that my feet were going to get wet, I even considered that perhaps the bottom of my trousers may also get wet and I thought it could make an amusing video, so my wife proceeded to film.

"It was a total shock when I disappeared into the hole, and I kept going down, I think the hole may have been nine to 10 foot deep."

Mr Lewis wasn't too scared and quickly scrambled out of the water. "[I] sat there composing myself whilst the wife laughed for a good 10 minutes," he said.

Luckily, he has a sense of humour about the whole thing. Check out his hilarious responses to some of the comments his viral video has received:

What do you think of the video? Let us know using the comments section.