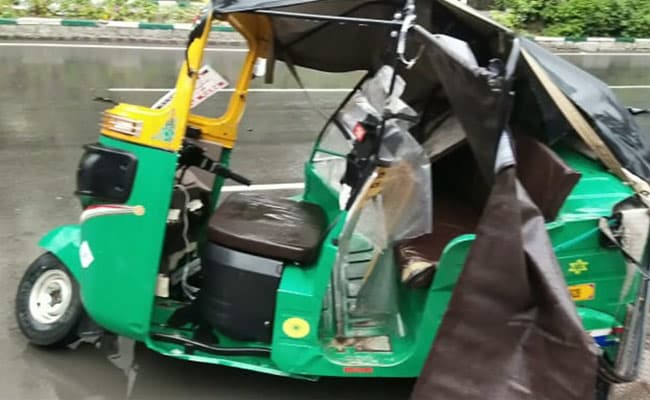 The auto-rickshaw was smashed when it was hit by the Audi car in Hyderabad.

A video of reckless driving by a man in a speeding Audi car which hit an auto-rickshaw from behind and sent it spinning on the roads of Hyderabad amid heavy rainfall late in the night was shared by the Cyberabad police on its Twitter account this morning.

A passenger inside the auto-rickshaw died on the spot after the accident near Inorbit Mall in Madhapur area on Sunday, the police said, while the driver has been injured.

"Reckless speed and drunk driving of an Audi car kills a passenger (an employee of Prism Pub!!) in the auto yesterday early morning near Inorbit Mall," the Cyberabad police said on Twitter, while sharing the CCTV footage of the accident.

Reckless speed and drunk driving of an Audi car kills a passenger (an employee of Prism Pub !! ) in the auto yesterday early morning near Inorbit Mall.A case of culpable homicide not amounting to murder has been booked against the Audi driver and his associates.#RoadSafetypic.twitter.com/vhJfsiL9cS

The passenger was identified as Umesh Kumar, an employee of Prism Pub in Hyderabad, who was returning home to Begumpet, when the Uber auto he was travelling in was hit from behind by the luxury car.

Two 24-year-old men who were in the car at the time of the accident, Sujith Reddy, a civil engineering student, and Ashish, an employee at software firm HCL, have been arrested. Sujith Reddy's father Raghunandan Reddy, who is the owner of the car, has also been arrested.

Officials initially identified Raghunandan Reddy, a businessman, as the owner of the car. Mr Reddy's driver confessed to the crime but an investigation by the police revealed that his son was involved.

Through the CCTV footage and questioning of Sujith Reddy, it was found that he and Ashish were drunk after coming back from a private party and one of them was driving the vehicle at high speed when it hit the auto-rickshaw.

Police official Ravinder Prasad said: "The father hid his son and friend at a flat in DD colony and brought his driver Prabhakar to confess. But CCTV footage showed clearly two young men running out of the car after it stopped about 100 metres away, taking out the number plate and assaulting security men who tried to stop them. The driver (employee) is 55-years-old and the story did not match. So the father, son Sujith Reddy and his friend Aashish were arrested."

Auto-rickshaw driver Sreenu said it was his first trip in the early hours of Sunday when he picked up a passenger and was heading towards Begumpet. He said his rickshaw was suddenly hit and it went into a spin near the Ikea crossing in the city.

"I was lucky to escape alive. My passenger who was about 37-years-old died. My auto is just about four months old. It is now smashed. I have three daughters. I have money to repay that I borrowed for financing the auto. How should we survive?" the auto-rickshaw driver asked.

Last week, a woman died and five others were seriously injured after a Mercedes SUV ran over a pedestrian and rammed an auto-rickshaw and other vehicles in Hyderabad's Old City area. The police said the owner of the Maharashtra-registered car had fled with his family but was arrested later.