To Crazy In Love Aishwarya-Abhishek On Anniversary, Hugs From Tina Ambani 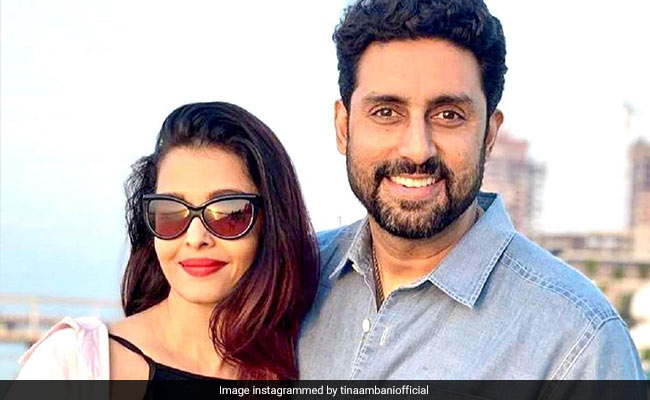 Aishwarya Rai-Bachchan and Abhishek Bachchan celebrate their 14th wedding anniversary today. The couple is quite low-key about their personal life on social media. Their family friend, Tina Ambani, shared a wonderful photo along with a heart-warming note to wish the couple. The former actress and wife of businessman Anil Ambani posted a throwback picture where Abhishek and Aishwarya were all smiles for the lens. Tina wrote, "Can't believe it's been 14 years since your beautiful wedding. Still crazy in love, utterly gorgeous and the most fabulous parents to Aaradhya. Blessings and heaps of hugs and love - happy anniversary."

Fans were delighted to see this photo on the social media feed. They extended anniversary wishes for the duo in the comments section. Aishwarya and Abhishek got married on April 20, 2007. It was an intimate wedding ceremony that took place in the residence of Bachchans, Prateeksha. The couple welcomed their first child, Aaradhya, in 2011.

Abhishek recently praised his life partner for being a "sensible wife." In his chat with Bollywood Bubble, the Guru actor spoke about the time spent with family during lockdown. Abhishek was quoted saying, "I was speaking to my wife about this, and as all wives do, they put your lives into focus and put you back on track. She said, 'For the first time in your life, you got to spend an entire year with your family, and your family is safe and healthy today'. And when she said that, apart from being appreciative of having such a wonderful and sensible wife, it's so true."

Workwise, Abhishek was last seen in The Big Bull where he played the character based on stockbroker Harshad Mehta. He will be soon seen in a social comedy, Dasvi. Meanwhile, Aishwarya's next release is the Tamil film, Ponniyin Selvan, directed by Mani Ratnam.