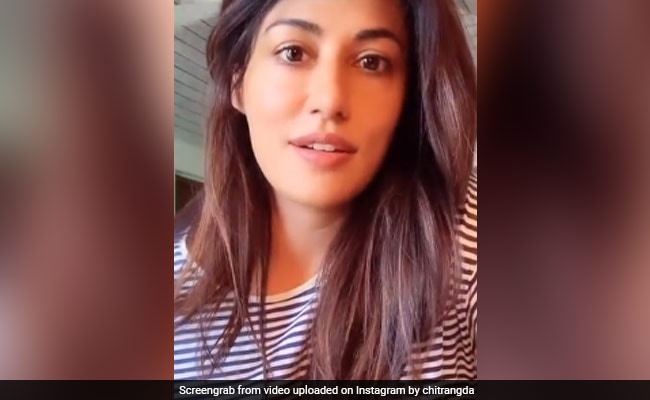 Chitrangda Singh in a still from the video. (Image courtesy: chitrangda)

When actress Chitrangda Singh is not winning our hearts with her performances, she is impressing us with her social media game. From stunning pictures to lovely videos, her Instagram feed is a collection of treasured moments. She also gives her fans a peek into her likes and dislikes, keeping them hooked with witty captions. Now, the 44-year-old has shared a post in which is professing her love for the Hollywood film Fault In Our Stars. In the clip, the actress is seen lipsyncing to a dialogue, originally delivered in the film by the character of Hazel Grace, played by Shailene Woodley.

Sharing the video, Chitrangda wrote, "#Slidebacksunday to those TikTok busy weekends! The movie fault in our stars .. had so many amazing dialogues .. one of them when John says to Grace. You don't get to choose if you get hurt in this world...but you do have some say in who hurts you. I like my choices. John Green." The film is based on the eponymous book by John Green and traces the lives of two cancer-afflicted teenagers who meet at a cancer support group.

Fans seemed to love the actress' version of the character and flooded her comments section with heart emojis. Watch the video here.

The gifted dancer had previously also shared a video where she is lip-syncing and grooving to the song Billo Rani from Dhan Dhana Dhan Goal. Adding an element of fun to the video, Chitrangda used a filter that added a bejewelled veil to her face.

Fans also got to see Chitrangda's pet-parent avatar when she shared a bunch of photos confessing that, unlike others who either liked dogs or cats, she was, both, a "meow and woof person". Along with the sweet photos, she wrote, "Are u a dog person or a cat person?... Now am both ‘meow & woof' person." Take a look at the photos here.

Her love for animals was further cemented by another photo where is seen performing Yoga in a garden, with a faithful Great Dane by her side. Sharing the photo, she wrote, "Yoga day every day... and some photo bombers!"

In terms of work, Chitrangda Singh will be seen next in the film Bob Biswas alongside Abhishek Bachchan. The actress made her debut in Bollywood with the Sudhir Mishra film Hazaaron Khwaishein Aisi in 2005. She has also appeared in films such as Inkaar, Yeh Saali Zindagi and I, Me Aur Main.