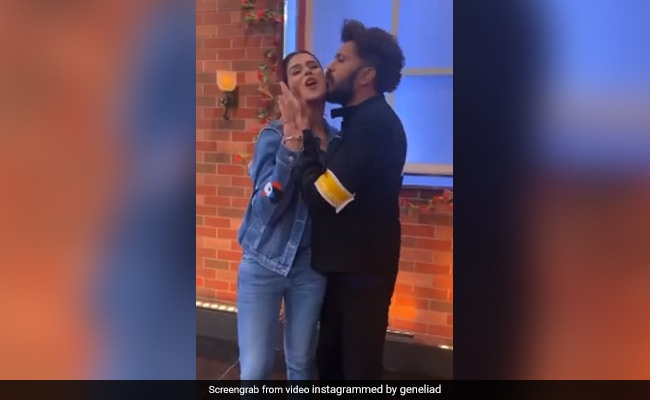 A still from the video featuring Riteish and Genelia. (Image courtesy: geneliad)

Genelia Deshmukh is back with a hilarious Reels with her husband, actor Riteish Deshmukh. This time we have someone special third-wheeling by their side and it's none other than filmmaker Farah Khan. The video is a funny enactment with a twist, thanks to the infectious humour in all three of them. Riteish juggles and flirts between Genelia and Farah while in the background plays the song Ek Taraf Hai Gharwali from the 1998 Bollywood film Gharwali Baharwali. The act ends when Farah finally pushes Riteish and walks away hand in hand with Genelia. We didn't expect Riteish to dance once the women were gone. But to watch Farah pull him by the neck out of the frame was the finishing touch that sent us laughing out loud.

Genelia's caption simply reads, "Gharwali vs Baharwali." When Farah posted the same video she mentioned that the couple were guests at her television comedy show. She wrote, "When my darling Riteish Deshmukh brings his gharwali Genelia Deshmukh to our show...My two favourites." Have a look at the video:

Both Farah and the couple are known for their sense of humour and their lively presence on Instagram. Genelia and Riteish keep us posted with entertaining videos and this isn't the first time we are spotting someone third-wheeling in their relationship. Last time, it was their pet dog who spoiled a romantic moment between the couple. It sent Genelia into peals of laughter while Riteish sat glumly watching the pet steal the show.

In a video, Riteish uses a scene from Genelia's film Jaane Tu Ya Jaane Na and takes a humorous dig at their own craze for Reels. We can't miss Genelia's reaction and Riteish's laugh. We definitely know their guilty pleasure in being so active on social media.

While the couple has entertained us with their videos, Farah has her own set of Instagram posts to make us feel mushy. Farah's fun videos mostly constitute some cute moments with her pet dog. Once, she recorded its "fear of missing out". In the video, she keeps kissing a cushion until the pet leaps at her to get a portion of her kisses. The heart-melting scene is too much for us to take.

Let us know what you think about these cute and funny videos by these three celebrities.