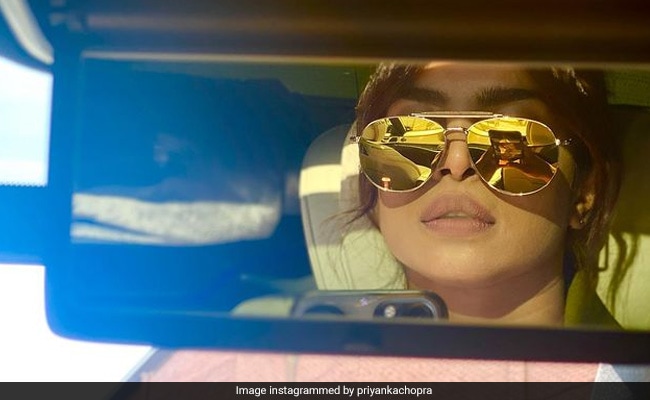 Priyanka Chopra had not updated her Instagram feed with a carfie for quite some time so, on Wednesday, the actress posted one and oh boy, did she nail it. The actress posted the photo from the sets of her work-in-progress series Citadel, which she has been filming in London since last year. In the picture, Priyanka Chopra looks stunning sporting a pair of gold sunglasses while clicking a mirror selfie in a car. "Hadn't posted a #carfie in a while. #citadel," she wrote in the caption. Reacting to his wife's post, singer Nick Jonas dropped a heart-eye emoji in the comments section.

Citadel is a multi-series with productions from India, Italy and Mexico. It is directed by The Russo Brothers.

The actress keeps on updating her fans about her new series by posting pictures of herself from Citadel set. Take a look:

Last week, Priyanka Chopra flew from London to the US to be with Nick Jonas on his birthday. The actress hosted a surprise birthday party for her husband in Farmington, Pennsylvania. Sharing a photo from Nick Jonas' birthday celebrations, Priyanka Chopra wrote: "Love of my life. Here's wishing the kindest most compassionate loving person I know a very happy birthday. I love you baby...Thank you for being you." The picture features Nick kissing Priyanka on the cheek.

Priyanka Chopra was last seen in The White Tiger, in which she co-starred with Rajkummar Rao and Adarsh Gourav. The film was nominated in the Best Adapted Screenplay category for Oscars 2021 but Anthony Hopkins' The Father, competing in the same category, won the award.

Other than Citadel, Priyanka also has Text For You and Matrix 4 lined up.