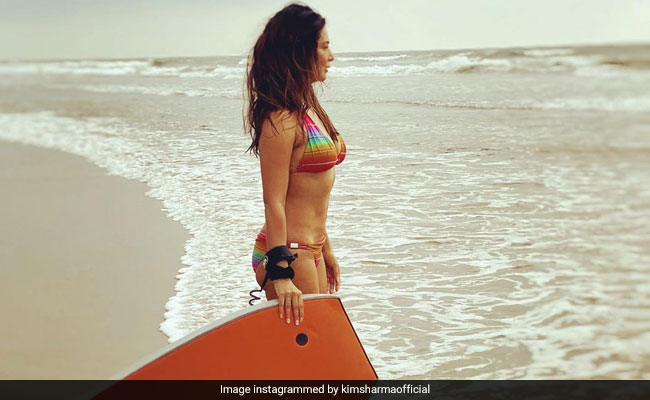 Kim Sharma is dreaming about the beach and her latest entry on Instagram proves it. The actress, on Saturday, flipped through the pages of vacation diaries and shared a stunning throwback photo of herself. However, it is her rumoured ex Yuvraj Singh's ROFL comment on her post that stole the show. Sharing the picture, Kim Sharma summed up her current state of mind like this: "What's better than a day at the beach? #notmuch #flashback." Reacting to her post, former cricketer Yuvraj Singh hilariously wrote: "Gaon basaa nahi basta lekar pahunch gai hain madam." In the photo, Kim Sharma can be seen wearing a multicoloured bikini and holding a surfboard while standing on the beach.

What's better than a day at the beach? #notmuch #flashback

And here's what Yuvraj Singh commented:

Kim Sharma often treats her fans to bikini pictures of herself. She recently made a trip to Goa and filled her Instagram feed with stunning pictures from her getaway. In some photos, she can be seen sporting an all-white outfit while in others, she can be seen chilling in a pool. Take a look:

In terms of work, Kim Sharma made her debut with Mohabbatein and went on to feature in several films such as Nehlle Pe Dehlla, Tom, Dick And Harry, Kehtaa Hai Dil Baar Baar and Padmashree Laloo Prasad Yadav. She was last seen in Sushmita Sen's Zindaggi Rocks, which released in 2006. Kim Sharma also made a special appearance in SS Rajamouli's Magadheera.

"Too Busy, Didnt Know What Raj Kundra Was Up To": Shilpa Shetty To Cops

At Kabul airport, remnants of US war bear testimony to chaotic exit