How Suriya And Jyotika Wished Each Other On 15th Anniversary

Star couple Suriya And Jyotika are celebrating 15 years of togetherness and on their special day, they decided to share adorable greetings for each other on their respective social media profiles on Saturday afternoon. Jyotika posted a picture with her husband Suriya and she wrote in her caption: "15 years of happiness. Thank you all for all the love and blessings." Meanwhile, Suriya, on his Instagram story, posted the same picture and he wrote: "You are my blessing Jo... Thankyou dear all for all the love and respect."

Jyotika, who recently made her Instagram debut, posted this: 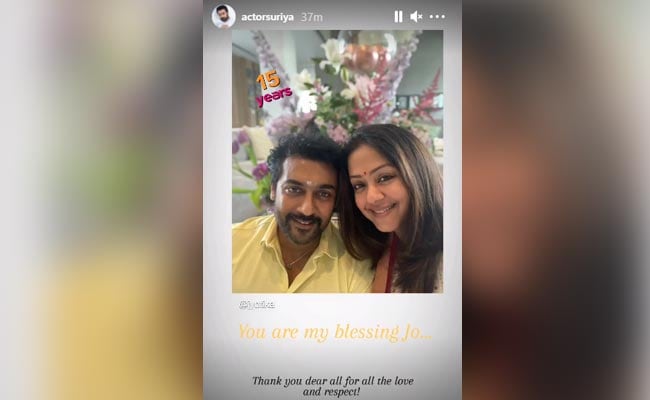 Suriya and Jyotika, co-stars of films like Poovellam Kettuppar, Uyirile Kalanthathu, Kaakha Kaakha, Perazhagan, Maayavi, June R and Sillunu Oru Kaadhal, got married in the year 2006. They are parents to a daughter named Diya and son Dev.

In terms of work, the actor was last seen in Netflix's Navarasa, which was backed by Mani Ratnam. Last year, Suriya was seen in Soorarai Pottru, which released on OTT streaming platform Amazon Prime Video in November. He has signed an untitled film with director Siruthai Siva. Suriya, who made his debut in 1997 with Nerukku Ner, is best known for his work in the hit Singam series of films, Kaakha Kaakha Vaaranam Aayiram, Nandha, Ghajini, 24 among many others

Jyotika featured in several hits like Mozhi, Kaakha Kaakha, Sillunu Oru Kadhal and Pachchakili Muthucharam, Seetha Kalyanam and 36 Vayadhinile among many others. She was last seen in the legal drama Ponmagal Vandhal.