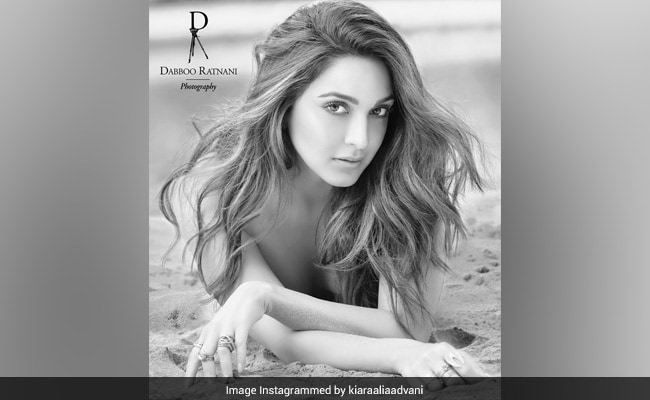 Kiara Advani, who features on celebrity photographer Dabboo Ratnani's annual calendar again this year, stole the spotlight on Instagram on Wednesday by sharing her picture from the calendar photoshoot. Kiara, who trended big time last year for her shot from Dabboo's 2020 calendar photoshoot, looks every bit of stunning in the latest photo. The actress can be seen posing on the sand in the photo. Her eyes say it all. Revealing Kiara Advani's look from his 2021 calendar, Dabboo Ratnani wrote: "Sandy toes and sun-kissed nose! Absolutely stunning and ethereal beauty Kiara Advani for #dabbooratnanicalendar2021." Take a look:

Kiara Advani's Instagram feed has glimpses of the actress just being her usual stunning self. This video of Kiara is all about the "sunshine and tan."

Did you meet water baby Kiara yet?

Kiara Advani made her debut in Bollywood with the 2014 film Fugly. However, her breakout film was 2016's MS Dhoni: The Untold Story, in which she co-starred with late actor Sushant Singh Rajput. She has also featured in films like Bharat Ane Nenu, Vinaya Vidheya Rama, Machine, Good Newwz and Laxmmi, to name a few. She was last seen in Indoo Ki Jawani.

The actress has reportedly been dating Sidharth Malhotra. She also has been working in a film with him.

Sidharth Malhotra and Kiara Advani's film Shershaah is slated to hit the big screens on July 2 this year.