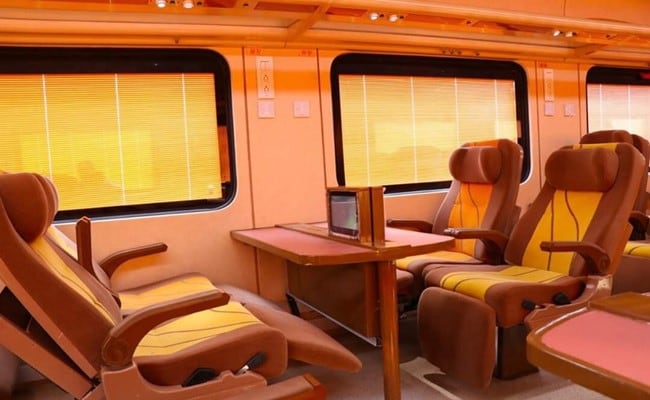 Since its listing in 2019 IRCTC shares have rallied nearly six times.

Shares of the Indian railways catering, tourism and online ticketing arm - Indian Railway Catering and Tourism Corporation (IRCTC) - rose as much as 6.56 per cent to hit a record high of Rs 4,017 on the BSE as the stock has been withdrawn from the NSE F&O banned list. The NSE places F&O shares in the banned list from time to time, preventing any fresh positions to be taken, when the derivative contracts surpass 95 per cent of the market-wide position limit.

IRCTC shares have been on an upward spiral after the company's board approved stock split in ratio of 1:5 last month. IRCTC's board decided to split the stock in order to help enhance liquidity in the capital market, widen shareholder base and make the shares affordable to small investors.

IRCTC shares have jumped a whopping 56 per cent after the stock split was announced on August 12. IRCTC has been a stark outperformer in the Indian markets as it has benefited from opening-up of the economy after the country recovered from the second wave of Covid-19 pandemic, analysts said.

IRCTC has moved in a speedy way from Rs 2,550 to Rs 4,000 levels in the last 17 trading sessions. It has been making higher highs and higher lows from the last five months and has rallied from Rs 1,550 to Rs 4,000 zones, Chandan Taparia, technical and derivatives analyst at Motilal Oswal Financial Services told.

"Major trend is positive and this momentum is not losing its bullish grip. It saw massive open interest addition of more than 50 per cent in this week and every small decline was being bought at any key support zones. It has seen call unwinding pressure and short covering is also taking it to higher zones. Support is placed near Rs 3,600 zones while momentum may extend towards Rs 4,200 and 4,500 zones. However risk reward ratio might not favor a fresh trade but those who are holding can keep the trailing support to ride this momentum," said Mr Taparia.

In the previous quarter, IRCTC announced turnaround results for the June quarter, reporting a net profit of Rs 82 crore for the quarter as against a loss of Rs 24 crore in the year-ago period.

"IRCTC is one particular company which has a virtual monopoly for Indian Railways. The amount of services it caters to is huge and there is no competition. The stock can thus achieve higher levels. There will be corrections, but smart long term investors can buy into all dips," Gaurang Shah of Geojit Financial Services told.

Since its listing in 2019, IRCTC shares have rallied nearly six times.

Omicron More Dangerous Than Delta? WHO's Take In 5 Points