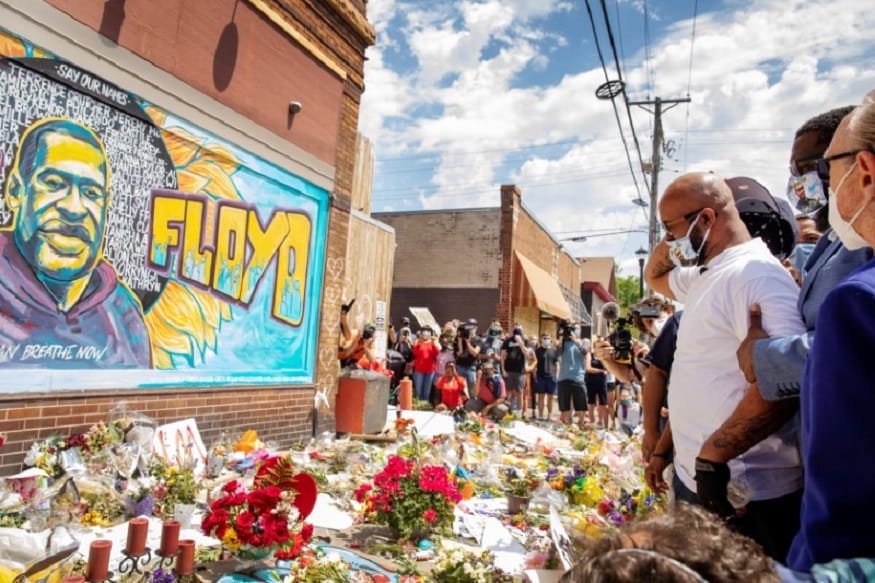 Minneapolis: A white mother tightly wrapped her arm around the back of her black teenage son as they silently stood still, gazing at a makeshift memorial honoring George Floyd steps from where he lost his life after a policeman knelt on his neck.

Then, Tenzing Walker, 14, walked up and placed a card to addressed to Floyd on the ground, which read "You will always be remembered, and we will keep fighting for you" outside of the Cup Foods convenience store where the deadly incident occurred exactly a week ago.

Walker and his mother were among the hundreds of mourners who came to the emotionally-moving site on this warm, sunny Monday to pay their respects to Floyd.

They prayed, embraced and laid bouquets of flowers and homemade "I Can't Breathe," "Justice for George Floyd" and "Black Lives Matter" signs on several already sprawling memorials at the intersection.

"This is amazing. This shows me love. No matter what happens, this shows us that as a community, we can come together," said Reginald Ferguson, director of a local youth program, as he gave out free food and personal care items at a table across the site.

Nearby children used colorful chalk to write heart-felt messages to Floyd on the pavement as volunteers handed out canned food, diapers and bottles water to the needy.

Video footage showed a white police officer kneeling on Floyd's neck for nearly nine minutes before he died. The incident has sparked days of protests over racial inequality and police brutality that have engulfed the cities across the United States.

Some of the protests, including those in Minneapolis have unraveled into uprisings, with reports of people breaking into stores and setting fires, a far cry from the scene at the site that evolved at a little after noon when the Floyd's brother arrived, knelt and wailed at the exact spot his brother died.

"Let's switch it up and do this peacefully," Terrence Floyd said through a bullhorn to the crowd, imploring them to vote.