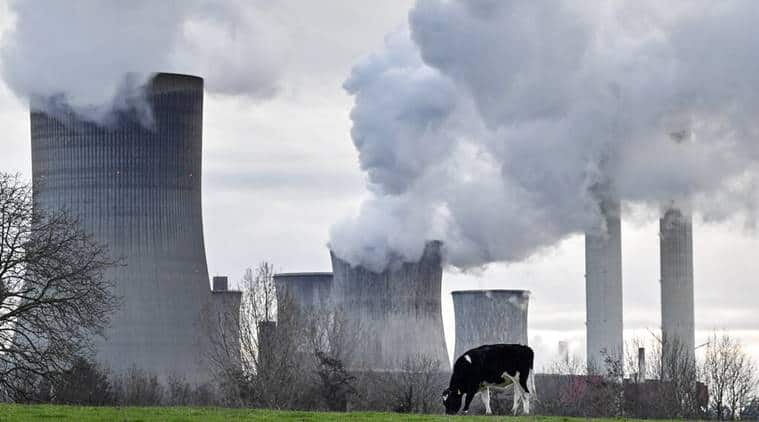 A cow grazes in front of the RWE Neurath lignite-fired power station in Grevenbroich, Germany, Monday, Jan. 13, 2020. Germany plans an entirely coal phase out and to shut down all remaining coal-fired plants by 2038.(AP Photo/Martin Meissner)

Since last year’s climate summit, over 100 governments (nearly double) have indicated to the United Nations their willingness to submit updated climate plans in 2020 in line with the 2015 Paris Agreement, suggests data from the UN’s climate body and 2019 UN COP25 hosts Chile. Significantly, while India has held out against updating its Nationally Determined Contributions (NDCs), at least 4 out of 5 countries it shares borders with, namely Nepal, Pakistan, Bangladesh, and Myanmar have agreed to update their NDCs this year. Their decision to update their NDCs is significant as it comes in the run-up to the COP26 to be held in Glasgow in the United Kindom in November 2020.

As per the report, small Island Pacific and Carribean states, Africa, leading EU economies, Argentina, Mexico, Ukraine, and Switzerland are among those set to submit new plans. India, China, and Japan are among those countries yet to announce when they will release new emission targets.

Additionally, over 120 countries have also informed the United Nations that they have either signed off on plans for net-zero CO2 emissions by 2050 or are working towards this target. These figures are critically important as it comes at the beginning of a year which witnesses violent bush fires in Australia and floods in Indonesia that continue to highlight the intensity of the global climate crisis.

Responding to the official data, COP26 President Claire O’Neill said, “I’m pleased to see that 114 countries have now committed to lowering emissions by rethinking their NDCs (Nationally Determined Contributions) in this crucial climate year of 2020. This is an increase of more than 60 percent since September. We will now urge countries to develop ambitious plans to deliver these commitments ahead of the COP26 summit in Glasgow. It’s also encouraging to see the number of countries following the UK’s lead, and pledging to develop a Net Zero plan has doubled from 60 to 121.”

Another expert, David Waskow, who is the International Climate Director at World Resources Institute (WR) said that the proportion of small and mid-size countries that are taking the lead in updating their climate commitments is for all to see and learn. “We see leadership coming from a very large number of vulnerable and other small and medium-sized countries — now making up a majority of countries that belong to the Paris Agreement. But what’s still glaringly missing is leadership from the largest emitters. The alarm bells should be ringing for them now.”