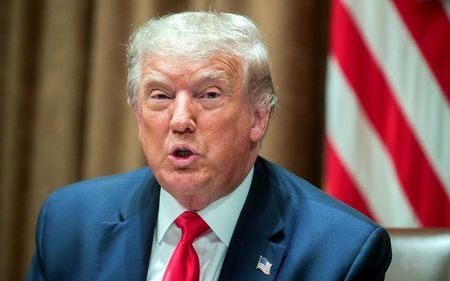 President Donald Trump vowed on Monday he would sue Nevada after the state’s Democratic lawmakers passed a bill to send mail-in ballots to every voter ahead of November’s presidential election in light of the coronavirus pandemic.

Trump, who has repeatedly claimed without evidence that voting by mail will lead to rampant fraud, wrote on Twitter the legislation approved on Sunday was an “illegal late night coup” and told reporters his administration was already preparing a lawsuit.

“We will be suing in Nevada. And that’s already been taken care of, we’ll probably file something tomorrow,” he said during a White House briefing.

The state’s Democratic governor, Steve Sisolak, signed the bill, making Nevada the seventh state to send ballots to all registered voters for the Nov. 3 election between Trump and Democratic presidential candidate Joe Biden.

Utah, Colorado, Hawaii, Oregon and Washington already conduct their elections entirely by mail, while California and Vermont have decided to do so this year due to the pandemic.

Trump told reporters he had a right to issue an executive order regarding mail-in ballots but did not elaborate on what that would involve.

“We haven’t gotten there yet,” he said.

Most states have sought to expand mail-in voting to avoid spreading the coronavirus at polling places on Election Day. The ongoing public health crisis has prompted litigation in dozens of states between Democrats and Republicans over issues like absentee ballots, postmark deadlines and signature requirements.

“I don’t think the Post Office is prepared for a thing like this,” Trump told reporters, referring to an expected increase in mail-in voting in the 2020 election.

Democrats and voting rights groups have warned that cost-saving measures instituted at the Postal Service by a Trump financial backer who is now postmaster general could lead to delays in service just as voting by mail ramps up.

Nevada mailed ballots to voters ahead of its primary election in June and encouraged residents not to risk in-person voting. Most of the state’s polling places were closed, leading to waits of as much as seven hours in Las Vegas.

“During this global pandemic, I made a commitment that we’d do all we can to allow Nevadans to safely cast a ballot in the upcoming November election,” Sisolak said on Twitter after signing the bill.

Trump, who trails Biden in polls, has raised a series of questions about the integrity of the election. Last week, he suggested delaying the election due to the likelihood of fraud, though he does not have the authority to do so.