Trump says Beirut explosion seems to be 'bomb of some kind,' cites generals 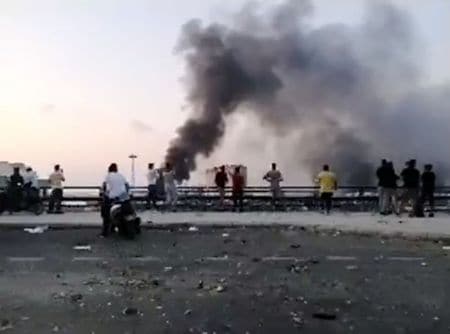 WASHINGTON President Donald Trump on Tuesday cast a massive explosion in Beirut as a possible attack, despite statements by Lebanese leaders that it was likely caused by highly explosive material that had been stored at warehouses in the capital for years.

“The United States stands ready to assist Lebanon,” Trump said at a White House briefing of Tuesday’s explosion, which killed at least 78 people and injured thousands.

When asked later about his depiction of the explosion, Trump said that he had met with some U.S. generals who feel the blast was not “some kind of a manufacturing explosion type of event.” He told reporters that according to these unnamed generals “they seem to think it was an attack. It was a bomb of some kind.”

The Pentagon referred questions to the White House.

Two U.S. officials, speaking on the condition of anonymity, said it was unclear where Trump was receiving his information but that initial information did not appear to show that the explosion was an attack.

The officials said the information so far tracked closer to what Lebanese officials had publicly given. They added that it was still early and could change as time went on.

Lebanon’s President Michel Aoun said that 2,750 tonnes of ammonium nitrate had been stored for six years at the port without safety measures and said it was “unacceptable”.

Prime Minister Hassan Diab said in a televised address to the nation there would be accountability for the deadly blast at the “dangerous warehouse”.