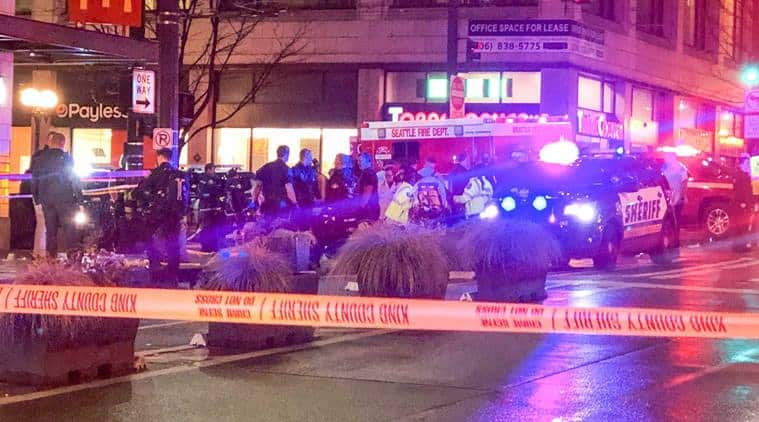 Police work the scene of a shooting on Third Avenue and Pine Street, Wednesday, Jan. 22, 2020, in Seattle. (Amanda Snyder/The Seattle Times via AP)

At least one person was killed and five others wounded in a shooting during the evening rush-hour at a Seattle shopping district on Thursday and the suspects remained at large, police said.

Police gave no further details but Seattle television station KOMO-TV, citing witness accounts, reported that two men were arguing as they walked down the street before pulling guns on each other and opening fire as pedestrians around them ran for cover.

All of those hit by gunfire were bystanders and the two gunmen vanished, KOMO reported.

An office worker identified only as Bill was quoted as saying he heard gunfire and saw scores of people running away in terror.

“It was sheer panic,” he said. “I’ve never seen anything like it.”

Seattle police said on Twitter that detectives were investigating after “six people were wounded by gunfire, one fatally”.

A Fire Department spokesman described the fatality as a woman about 40 to 50 years of age, who was found dead at the scene.

The police department said officers and medics were providing aid to victims at the scene.

KOMO-TV said a 9-year-old boy was among the wounded.