Notes In Hand, Donald Trump States His Case About Impeachment 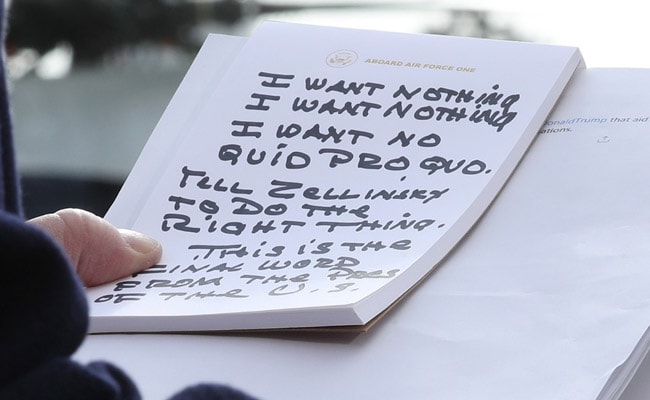 Sometimes it helps for a president to have notes.

President Donald Trump engaged with journalists on Wednesday as he regularly does when he departs the White House at the start of a trip, only this time he had some help with what he wanted to say.

Walking before assembled journalists, the president held a small stack of papers, including handwritten notes in thick black ink and mostly all caps, which he read aloud to reinforce his position that he did not seek favours from Ukraine earlier this year.

"I WANT NOTHING," he read from stationery marked ABOARD AIR FORCE ONE in notes captured by photographers. "I WANT NO QUID PRO QUO."

Usually, the president exits the White House without papers or paraphernalia in his hands.

Trump focussed his words on comments by the US. Ambassador to the European Union Gordon Sondland's testimony in congressional impeachment hearings about a conversation the two men had in which Trump told him he wanted nothing from Ukraine.

Once the president finished reading his papers, he did not stay to engage with reporters as he often does. Notes in hand, he proceeded to his noisy, waiting for presidential helicopter Marine One and took off.

250 kg ISIS Cleric Arrested In Iraq, Was "Too Large" For Police Car

What Queen Elizabeth Said On Prince Harry And Meghan's Future

"Conflict Will Also Engulf Us": Pak Urges US Iran To Lower Tensions