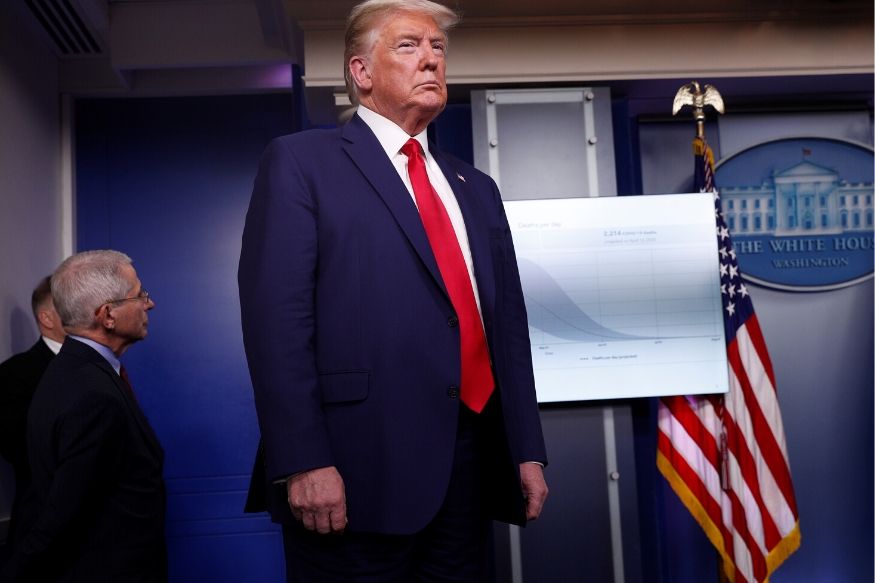 Washington: President Donald Trump warned Americans on Tuesday of a "painful" two weeks ahead in fighting the coronavirus, with a mounting U.S. death toll that could stretch into the hundreds of thousands even with strict social distancing measures.

In perhaps his most somber news conference to date about the pandemic, Trump, who has faced criticism for playing down the threat of the outbreak in its initial phases, urged the population to heed guidance to limit groups to no more than 10 people, work from home and not dine in restaurants or bars.

"It's absolutely critical for the American people to follow the guidelines for the next 30 days. It's a matter of life and death," Trump said.

White House coronavirus coordinator Deborah Birx displayed charts demonstrating data and modeling that showed an enormous jump in deaths to a range of 100,000 to 240,000 people from the virus in the coming months.

That figure was predicated on Americans following mitigation efforts. One of Birx's charts showed as many as 2.2 million people were projected to die without such measures, a statistic that prompted Trump to ditch a plan he articulated last week to get the U.S. economy moving again by Easter on April 12.

The president said the next two weeks would be "very, very painful." The modeling showed the number of deaths across the nation would escalate and peak roughly around mid-April.

"We want Americans to be prepared for the hard days that lie ahead," Trump said, predicting light at the end of the tunnel after that.

Dr. Anthony Fauci, director of the National Institute of Allergy and Infectious Diseases, who said previously that the pandemic could kill between 100,000 and 200,000 people in the United States, said all efforts were being made to make those numbers lower.

"We're doing everything we can," he said.

The federal guidelines, which now are in place through the end of April, include admonitions to avoid discretionary travel, not visit nursing homes, and practice good hygiene.

"There's no magic bullet. There's no magic vaccine or therapy. It's just behaviors: Each of our behaviors translating into something that changes the course of this viral pandemic over the next 30 days," Birx said.

Vice President Mike Pence said the mitigation efforts were having an impact. "We have reason to believe that it's working," Pence said of the guidelines. "Do not be discouraged."

Trump said he planned to remain at the White House for the most part over the next 30 days.

He added the White House was looking at a possible travel ban for Brazil.

After the White House earlier discouraged Americans from wearing masks if they were not sick, the president encouraged the practice on Tuesday, but said people should use scarves so as not to divert supplies from healthcare professionals.