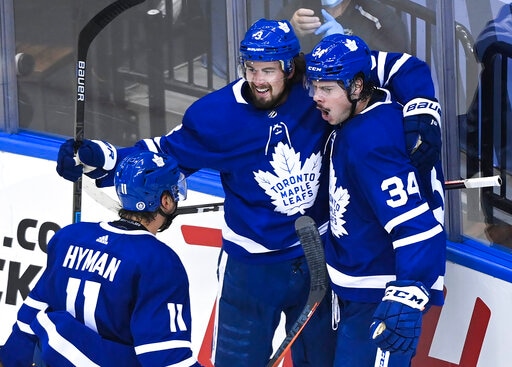 TORONTO Auston Matthews and John Tavares scored and the Toronto Maple Leafs beat the Columbus Blue Jackets 3-0 on Tuesday to even their best-of-five qualifying series at one game.

Toronto defenseman Jake Muzzin was taken off the ice on a stretcher with 1:52 left in the game after his head made violent contact with Columbus Oliver Bjorkstrand behind the Blue Jackets net. Muzzin was attended to by a trainer before more medical personnel arrived on the ice.

Frederik Andersen made 20 saves for his third career playoff shutout and Morgan Rielly added an empty-net goal with 43 seconds left.

The Blue Jackets, after shutting out Toronto 2-0 in Game 1, could muster little offense in this one while the Leafs finally solved goalie Joonas Korpisalo, who finished with 36 saves.

Toronto came out more aggressively than in Game 1, with much of the game being played in the Columbus defensive zone as Korpisalo was forced to make stop after stop. Five Leafs power plays helped keep the Blue Jackets on their heels.

The Leafs eventually beat the Columbus netminder who hadnt allowed a goal in the first 76 minutes of the series when Matthews tipped in Zach Hyman’s pass from the bottom of the right circle with 4 minutes left in the second period.

After Andersen turned away a flurry from Columbus, the Blue Jackets got caught with all five skaters close to their own net as the puck bounced away. Tavares got a breakaway and poked a shot under Korpisalos arm to make it 2-0 at 4:56 of the third.

NOTES: Columbus was 0 for 4 on the power play. … Blue Jackets D Dean Kukan left the bench for observation in the first period after a big hit by Toronto’s Kyle Clifford but returned later in the period. … Korpisalo got a shutout in his first ever playoff start Sunday. That also was the first playoff shutout in Blue Jackets history. … The 2019-20 season marks the Maple Leafs 69th appearance in the postseason.