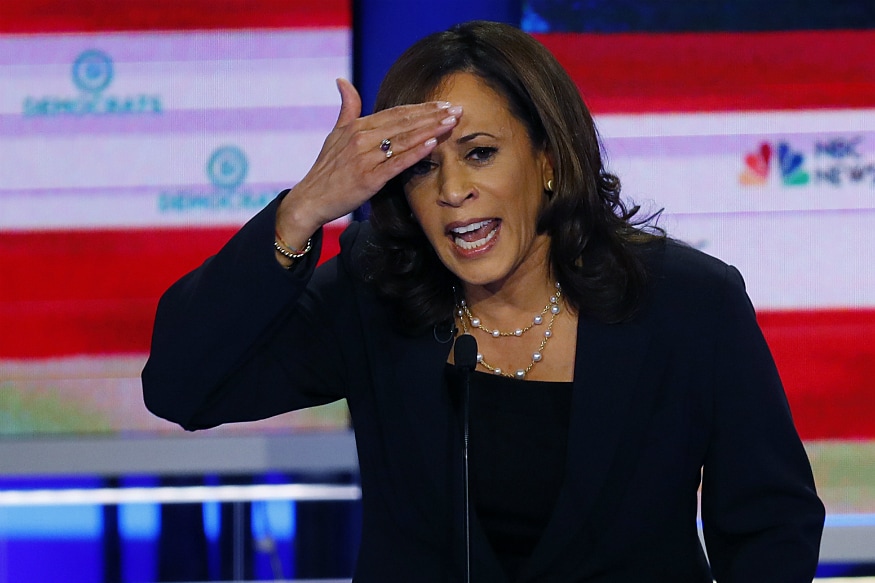 Washington: Kamala Harris, the first Indian-origin US Senator, has apologised for laughing and saying "well said" in response to a question from an Indian man who called President Donald Trump's actions "mentally retarded”.

The 54-year-old California Democrat and presidential candidate termed as "upsetting" the video, circulated on social media, of the Friday's incident at the New Hampshire town hall. She denied she had heard the offensive term.

"When my staff played the video from my town hall yesterday, it was upsetting. I didn't hear the words the man used in that moment, but if I had I would've stopped and corrected him. I'm sorry. That word and others like it aren't acceptable. Ever," Harris said in a tweet on Saturday.

When my staff played the video from my town hall yesterday, it was upsetting. I didn’t hear the words the man used in that moment, but if I had I would’ve stopped and corrected him. I’m sorry. That word and others like it aren’t acceptable. Ever. https://t.co/mNmo1hyNpW

The questioner at the Londonderry town hall identified himself as being from Chennai, the same hometown as Harris' mother, and said he had spent "all this effort" to live the American dream and then Trump was elected, the CNN said in report.

"Somehow a racist bigot gets into the White House and then he says if you're not my colour you need to go back to your own country," said the man.

He then asked Harris what she would do, "in the next one year, to diminish the mentally retarded action of this guy?" the report said.

The Indian man was applauded and the crowd laughed.

Harris too laughed and responded: "Well said, well said"... "I plan to win this election, I'll tell you that," she was quoted as saying in the report.

"Thank you for having the courage to stand up and say it is that there are a lot of people living with extreme fear right now in our country, extreme fear," Harris said.

The video made the rounds on Twitter on Saturday, hours after Harris had taken the stage at the New Hampshire Democratic Party Convention.

Harris was criticised online for using those words, prompting her to tender an apology.

Born in Oakland, California, Harris is the daughter of an Indian mother who migrated to the US from Chennai in 1960 and a Jamaican-American father.

Her mother Shyamala Gopalan studied science and complex mechanisms of cancer. Her father Donald Harris grew up in Jamaica, where he became a national scholar and earned the opportunity to study economics in the US.

During the Obama era, she was popularly called as the "female Obama". A decade ago, journalist Gwen Ifill called Harris "the female Barack Obama" on the "Late Show With David Letterman". Later, a small businessman from Willoughby Tony Pinto called her "a young, female version of the president".

She is considered to be close to Obama, the first black American President, who endorsed her in her various elections including that of the US Senate in 2016.