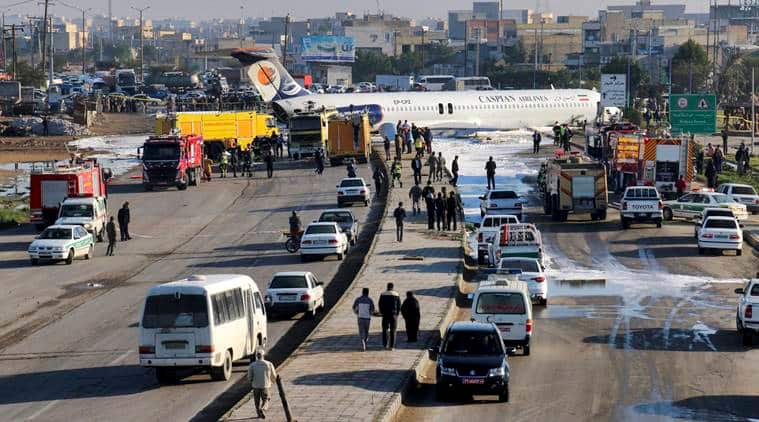 An Iranian passenger plane sits on a road outside Mahshahr airport after skidding off the runway, in the southwestern city of Mahshahr, Iran, Monday, Jan. 27, 2020. (AP)

A Caspian Airlines plane slid off the runway onto a highway on landing at an airport in southwestern Iran on Monday, but all passengers were evacuated without injury, Iranian state media reported.’

“It ran out of runway when landing at Mahshahr airport with no casualties,” state news agency IRNA said.

Some other Iranian media outlets reported 135 passengers and seven crew members were on board but there was no official confirmation. The passenger plane is seen after sliding off the runway upon landing at Mahshahr airport, Iran January 27, 2020. (Reuters).

Iranian media reported that the pilot was unable to deploy the landing gear, adding that the incident was being investigated.

“The plane did not catch fire and all passengers safely left the plane,” managing Director of Khuzestan Airports Mohammad Reza Rezaei told IRNA. An Iranian passenger plane is seen after sliding off the runway upon landing at Mahshahr airport, Iran January 27, 2020.(Reuters)

An unverified video shared on social media showed an evacuation of passengers from the plane sitting in the middle of a highway in Mahshahr.

On Saturday, an Iranian airplane en route from Tehran to Istanbul made an emergency landing at a Tehran airport because of a technical problem, the semi-official Mehr news agency reported.

Iran’s airlines have been plagued by crashes, which Iranian rulers blame on US sanctions that block the airlines from replacing their ageing fleets or purchasing spare parts from the West.