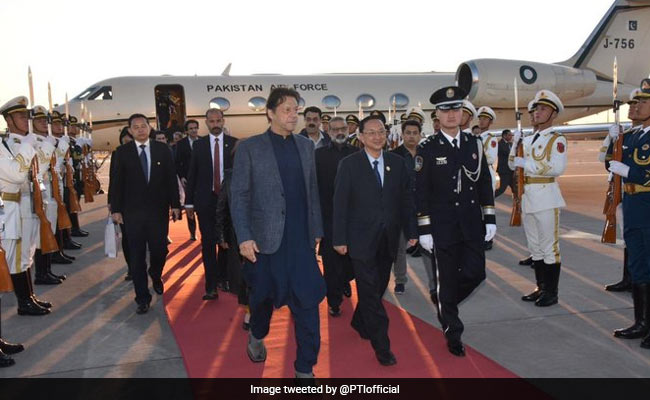 Pakistan Prime Minister Imran Khan has arrived here on Tuesday on a two-day visit to China during which he will hold talks with the top Chinese leadership, including President Xi Jinping, and discuss issues of regional and bilateral significance.

Mr Khan will reportedly meet the country's top leadership, including President Xi, and discuss issues of regional and bilateral significance.

His visit to China, third since he took over as Prime Minister in August last year, acquires significance as it comes days ahead of President Xi''s planned high-profile visit to India to take part in the 2nd informal summit with Prime Minister Narendra Modi at Mamallapuram near Chennai this week.

However, there has been no official announcement here yet on Xi''s visit to India.

The Pakistani prime minister will have separate meetings with President Xi and Chinese Premier Li Keqiang to discuss issues of regional and bilateral significance, an earlier APP report said.

Imran Khan's visit takes place at a time when tensions have spiked between Pakistan and India after New Delhi ended the special status of Jammu and Kashmir on August 5.

Beijing, the all-weather ally of Islamabad, has backed Pakistan over the Kashmir issue, with its Foreign Minister Wang Yi saying, "no actions that would unilaterally change the status quo should be taken".

Imran Khan will also discuss expansion of projects under the China-Pakistan Economic Corridor (CPEC) framework besides cooperation in agriculture, industrial and socioeconomic sectors, the report said.
Khan is also expected to attend the China-Pakistan Business Forum in Beijing on Tuesday.

The CPEC was launched in 2015 and several projects under the first phase are close to completion. But the progress on next phase projects has slowed since Prime Minister Khan came to power last year.

Imran Khan while chairing a meeting on the economic corridor on Wednesday said removal of all bottlenecks in the CPEC projects and their timely completion was the top priority of the government, the Dawn newspaper reported.

He said he would visit China and meet its leadership to strengthen friendship between the two countries.

The Pakistan daily reported that most of the CPEC-related projects have been stalled due to certain reasons, including prevailing financial crunch confronting the government and non-cooperation of the bureaucracy due to fear of the National Accountability Bureau'', the anti-corruption watchdog.

The CPEC is the flagship project of President Xi's pet multi-billion Belt and Road Initiative (BRI). The CPEC has also become a major irritant in India-China relations with New Delhi voicing its opposition to the infrastructure project as it traverses through Pakistan-occupied Kashmir (PoK).