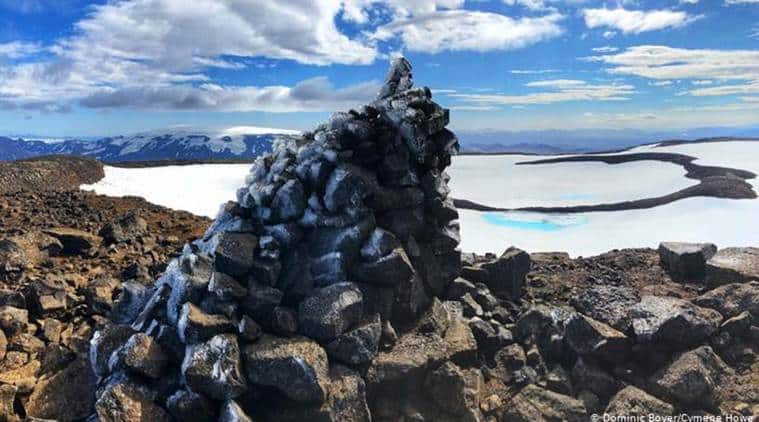 Iceland has been commemorating the country’s first glacier lost to climate change, with a memorial plaque warning of the effects of global warming being installed at the site.

Icelandic officials, activists and others took part in a ceremony on Sunday that included poetry, silence and political speeches on the urgency of taking action to curb rising global temperatures.

The disappearance of Okjokull, a glacier in the west of the sub-Arctic island, is being seen as directly due to the warming of the climate caused by human activity.

The plaque bears the words: “This monument is to acknowledge that we know what is happening and what needs to be done. Only you know if we did it.”

“We see the consequences of the climate crisis,” Icelandic Prime Minister Katrin Jakobsdottir said. “We have no time to lose.” She said she would make talks on the climate crisis a priority at a meeting between Nordic leaders and German Chancellor Angela Merkel on Tuesday.

The commemoration project was initiated by local researchers and their colleagues from Rice University in the US. Guests also included Iceland’s the environment minister, Gudmundur Ingi Gudbrandsson and the former United Nations high commissioner for human rights, Mary Robinson.

“This will be the first monument to a glacier lost to climate change anywhere in the world,” Cymene Howe, associate professor of anthropology at Rice University, said in July.

Scientists warn that about 400 glaciers in Iceland risk the same fate, fearing that they will all be gone by 2200. The country is losing approximately 11 billion tons of ice per year.

Howe said that memorializing a lost glacier emphasizes what is being lost and disappearing all over the world. She said that a ceremony also draws attention “to the fact that this is something that humans have ‘accomplished,’ although it is not something we should be proud of.”

A ceremony to provoke real emotions

The researchers said that as conversations about climate change can be abstract with “many dire statistics and sophisticated scientific models that can feel incomprehensible,” a monument to a fallen glacier is a better way for people to comprehend what is happening to the planet.

The researchers hoped the commemoration would provoke feelings through the powerful use of symbols and ceremony.

Okjokull, meaning “Ok Glacier” in Icelandic, became Iceland’s first major ice flow to be officially stripped of its glacier status in 2014. It has now been called just “Ok,” removing the glacier from its name.

The International Union for Conservation of Nature estimates that nearly half of the world’s heritage sites could lose their glaciers by 2100 if greenhouse gas emissions continue at the current rate.

Iceland has become heavily reliant on tourism, which is the country’s biggest industry. The island welcomed 2.3 million international tourists last year, with many visiting to admire its glaciers.