Bright, colourful murals are up all over town on the walls of office buildings, warehouses, corner stores, laundromats, and even public schools and sports stadiums. (Express Photo by Sandip G)

The twin earthquakes destroyed most of Christchurch’s art galleries. Even the Christchurch Art Gallery, the city’s pre-eminent art institution, was driven to the streets. For six months after the quake, it was taken over by recovery authorities, and then it was shut down for its own repairs.

Without a home, the gallery began commissioning murals on walls across town. Soon, street murals became a trend that’s still flourishing in the city. And Christchurch became the mural capital of the country, overtaking Wellington.

Most of the artists apparently left the city, but many remained, expanding their work, finding new scope and range. There are so many murals and public artworks now-some commissioned by the gallery, others by the long-running SCAPE Public Art group that the entire city centre feels like a giant exhibition space.

Competition for wall space is fierce — one of the gallery’s murals was even tagged by a graffiti artist who not so politely requested the gallery keep its art indoors.

Bright, colourful murals are up all over town on the walls of office buildings, warehouses, corner stores, laundromats, and even public schools and sports stadiums. Some streets are so dense with murals that it’s hard to find an empty wall. Often, the work carries a strong social message on subjects from domestic violence and immigration, to education and gender diversity. 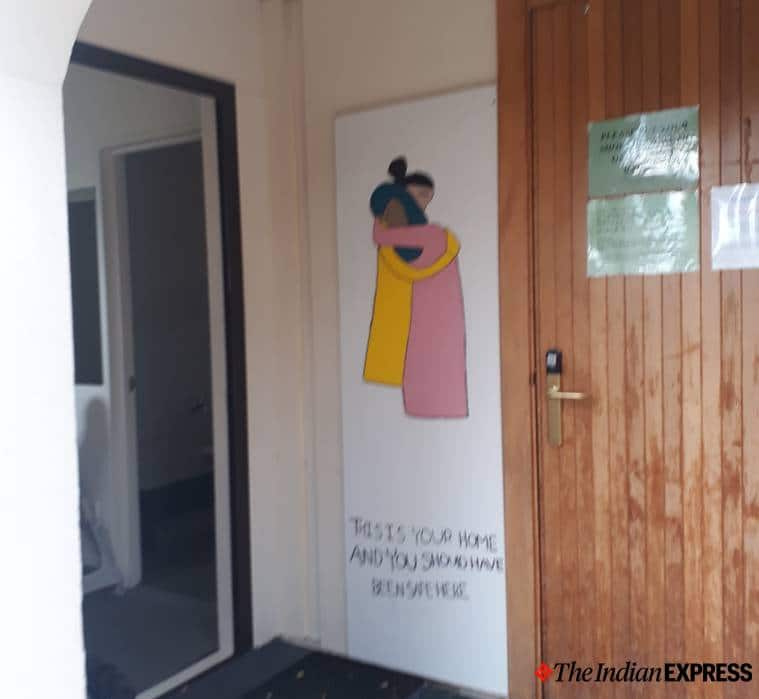 The most famous ones are those drawn by Ruby Jones, who designed a Time magazine front cover after her illustration in response to the Christchurch mosque attacks went viral. (Express Photo by Sandip G)

Some portray faces of indigenous men and women, some works are abstract, some skilfully done tributes to favourite cartoon characters, bands or movies. The most famous ones are those drawn by Ruby Jones, who designed a Time magazine front cover after her illustration in response to the Christchurch mosque attacks went viral. The artwork depicted two women hugging with the caption, “This is your home and you should have been safe here”. One of the women was Muslim and wearing a hijab.

After that, works from her book All Of This Is For You were recreated on the walls. They include a drawing of two men holding hands with the caption “Stand up for what you know is right”, a figure looking out of an open window with the text “No-one else knows what they are doing either”, and a woman holding a child’s hand with the message “Look after yourself the way you’d look after your 5-year-old self”.

Other recognisable pieces include Richard Baker’s Rising Tide row boat mural on the Sampan House Restaurant building on Gloucester Street. Another one is Wongi Wilson’s Hide and Seek mural on Manchester Street, the city’s red-light area. Its street art is a tourist attraction full of Instagram moments with ‘Lonely Planet’ naming Christchurch as one of the street art capitals of the world.

As an off-shoot, self-sustained local groups started funding street art festivals in the city, attended by connoisseurs from all over the world. The street art culture has gone to such a level that the video animation of the mural is the latest trend.

Will Consider Pak's Request For Financial Aid To Cope With COVID-19: IMF

Strike Partnerships of ATK, Chennaiyin FC in Focus as They Look to Become 1st Team to Win ISL Title 3 Times