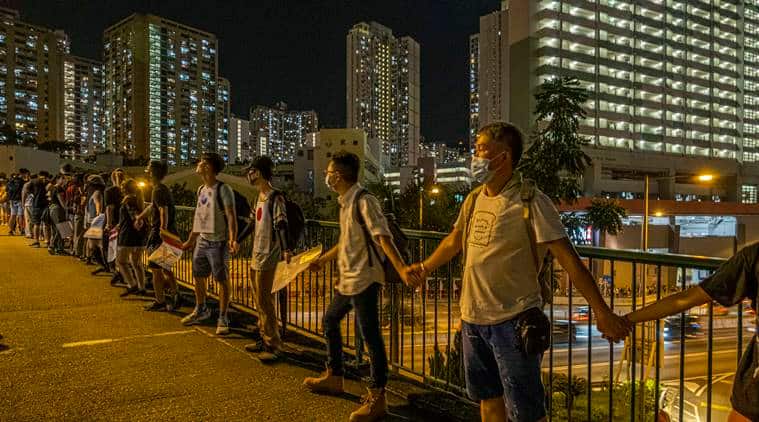 Hong Kong residents Friday night formed human chains across large parts of the city in a call for direct elections, a test of the continuing strength of the monthslong protest movement and a display that recalled a major anti-Soviet demonstration 30 years ago.

Participants fanned out across three routes over densely populated sections of Hong Kong Island, Kowloon and the New Territories. Organizers said on Saturday that more than 210,000 people had participated, covering a total of about 35 miles.

The plans developed online after a march Sunday drew hundreds of thousands who demonstrated in the rain, a sign that protesters had not been dissuaded by a police ban or warnings from the Chinese government.

Participants on Friday sang protest songs and chanted slogans. While many joined hands, others held up their cellphones to illuminate the lines of people. Several held signs with flags of foreign nations and the phrase, “Thank you for supporting freedom and democracy!”

They lined up along Victoria Harbor and on Lion Rock, the peak that overlooks the Kowloon Peninsula. They stood amid apartment towers and on busy shopping streets, beside drinkers spilling out of bars and office workers heading home.

“I want to deliver a message to the world that we are peaceful,” said Lee Kin, 29, an insurance company employee who joined the chain in the Wanchai neighborhood on Hong Kong Island. “Even though I support fighting violently against the Chinese Communist Party, if we can demonstrate peacefully, we can get more support from the rest of the world.”

The event followed a variety of protest efforts, including marches, petitions, advertisements in international publications and walkways filled with art, as well as more confrontational actions such as defacing government buildings, clashing with the police and blocking roadways and trains.

Paul Au, 62, the owner of a record store, previously participated in several protest movements in Hong Kong, including after the deadly crackdown on the Tiananmen Square protests in 1989. None of those, he said, were as large as the demonstrations this summer.

“We have shown today that we are very peaceful, so let’s see what they can do to us,” Au said after joining protesters in the Sham Shui Po neighborhood.

Friday was the 30th anniversary of the 1989 Baltic Way protest, when up to 2 million residents of Estonia, Latvia and Lithuania formed a chain to call for independence from the Soviet Union.

"Not As Large-Hearted As...": Nirbhaya's Father On Forgiving Convicts