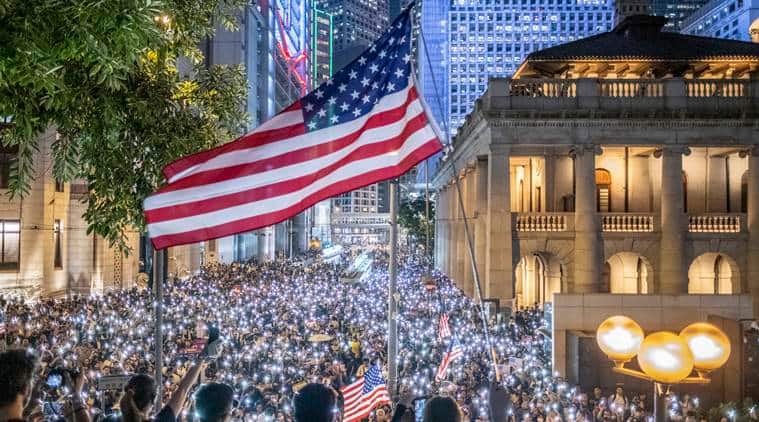 As Lam took her place at the chamber’s lectern to deliver her annual policy address, lawmakers repeatedly jeered and shouted at her, demanding her resignation. After two failed attempts, Lam retreated, and she later delivered the speech by video from a protected location.

Lam, who is under pressure from China’s central government to put an end to the increasingly violent protests that have gone on for more than four months, showed no signs of compromise in her address.

“Any acts that advocate Hong Kong’s independence and threaten the country’s sovereignty, security and development interests will not be tolerated,” she said.

Pro-democracy lawmakers had reacted with anger to Lam’s presence before she even said a word. When she entered the chamber, they played a recording of high-pitched screams and the firing of tear gas to evoke the protests. As they shouted, the image of a central protest movement slogan, “Five demands, not one less!” was suddenly projected onto the stage. Lam stood silently at the lectern before retreating.

Lam used her address to announce a series of measures aimed at tackling long-held economic grievances in Hong Kong, including rising inequality and the high cost of living.

But she avoided addressing the political demands of the protesters, such as an investigation of the police’s use of force and a call for free elections, that are at the center of the territory’s worst crisis in decades.

The protests have quickly morphed into the most direct challenge to Communist Party rule in decades.