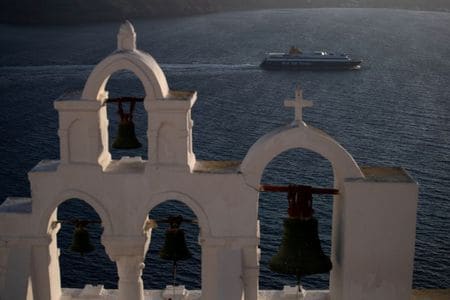 ATHENS Greece will make mask-wearing compulsory on the decks of ferries sailing to its islands, extending the requirement beyond indoor public spaces, after a sudden rise in coronavirus infections that could put its crucial tourism season at risk.

Greece reported 110 new cases on Saturday, its highest single-day increase in several weeks. Another 75 confirmed cases were reported on Sunday.

Last week Greece made mask-wearing mandatory in all indoor public spaces and also in outdoor spaces where proper social distancing cannot be observed.

The new measure will go into effect from Tuesday until Aug. 18, as the summer holiday season hits its peak.

Greece has so far confirmed 4,662 COVID-19 cases and 208 deaths, a relatively low number compared with many European countries, after imposing a lockdown in the spring.

But rates have been creeping up after a lull from late May to late July.

“It is a decision which personally I don’t understand, I believe it is wrong or at least I don’t know the criteria on which it was based,” Greek Tourism Minister Harry Theocharis told Parapolitika radio.

“I hope there will be some sort of communication, some understanding between epidemiologists from both sides,” he said, adding that Greece is a safe country.

Tourism is a key driver of Greece’s economy which is seen shrinking up to 10 percent this year and is slowly emerging from a decade of debt crisis. Greece is a popular holiday destination for thousands of Cypriots.

History In The Making, But Naysayers Clamour On, Now With ‘Mahurat’ Politics | The Right Stand