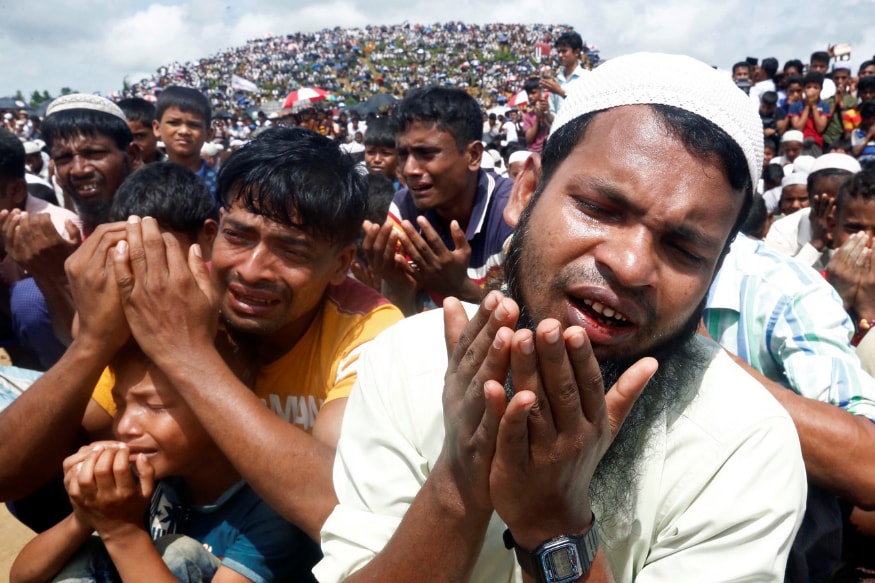 Kutupalong: Some 200,000 Rohingya rallied in a Bangladesh refugee camp to mark two years since they fled a violent crackdown by Myanmar forces, just days after a second failed attempt to repatriate the refugees.

Around 740,000 Rohingya from Myanmar's Rakhine state escaped in August 2017 during the brutal offensive, joining another 200,000 who fled earlier persecution in vast camps in southeast Bangladesh.

Children, hijab-wearing women, and men in long-skirt lungis shouted "God is Great, Long Live Rohingya" as they marched at the heart of the world's largest refugee camp to commemorate what they described as "Genocide Day".

Under the scorching sun, thousands joined in a popular song with the lyrics "the world does not listen to the woes of Rohingya".

"I have come here to seek justice for the murder of my two sons. I will continue to seek justice till my last breath," 50-year-old Tayaba Khatun said as tears rolled down her cheeks. Myanmar had said they were conducting counter-insurgency operations against Rohingya extremists after they attacked police posts, but the UN last year called for Myanmar's top generals to be prosecuted for genocide over the crisis.

Rohingya leader Mohib Ullah said the stateless minority wanted to return home, but only after they were granted citizenship, their security was ensured and they were allowed to settle back in their villages.

"We have asked the Burmese government for dialogue. But we haven't got any response from them yet," Ullah told the rally. "We were beaten, killed and raped in Rakhine. But still that is our home. And we want to go back." Police officer Zakir Hassan told AFP some 200,000 Rohingya took part in the peaceful gathering.

Security has been tight across Kutupalang camp, the world's largest refugee settlement and home to more than 600,000 Rohingya. "Hundreds of police, army and border guards have been deployed to prevent any violence," local police chief Abul Monsur told AFP.

The rally came three days after the failed attempt to repatriate the refugees, which saw not a single Rohingya turn up to return across the border. On Saturday, Bangladesh police said they shot dead two refugees during a gunfight in a camp after the pair were accused of killing a ruling party official.

The Rohingya are not recognised as an official minority by the Myanmar government, which considers them Bengali interlopers despite many families having lived in the country for generations.