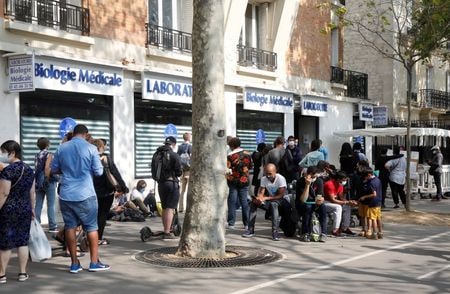 PARIS: France’s health authorities on Sunday reported 7,183 new confirmed COVID-19 cases in the past 24 hours, down from a record 10,561 new infections on Saturday.

In a daily website update, the French health ministry also reported the number of arrivals in hospital for COVID-19 over the past week had risen to 2,464 compared with 2,432 recorded on Saturday.

These included 427 admissions to intensive care units over the past seven days, up from 417 in Saturday’s count, it said.

Like other European countries, France has faced a resurgence of the novel coronavirus, leading the government on Friday to promise steps to speed up tests and toughen measures in high-infection zones to avert a return to the general lockdown imposed earlier this year.

The government has called on individuals to be more vigilant in private situations, and in an op-ed piece published in French newspaper JDD on Sunday six doctors called for people to avoid private gatherings.

The death toll since the start of the COVID-19 outbreak this year in French hospitals and nursing homes had reached 30,916, with six deaths recorded in the past 24 hours, according to the health ministry.

"Risk Of Civil Unrest" Around US Election, Warns Mark Zuckerberg

We Want To See Our Fans In India And Show Them Our Performances: BTS